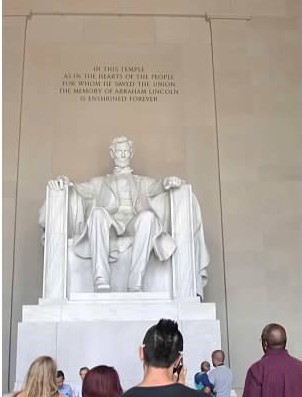 Me: Do you know who that statue is?

Me: Um. Well, the name I know him by doesn’t start with those letters.

Me: No, this statue is of someone who was president of the United States.

6yo: Oh, well maybe he isn’t from DC Comics. His name is Zombie Man!

Me: Well, I know him as Abraham Lincoln.

6yo: Oh, yes! Abraham Lincoln! From the penny!

Me: Yes. Abraham Lincoln. From the penny.

I suppose I should feel grateful that he remembered that Lincoln is on the penny and that somewhere in his head is a connection to DC. It’s a decent start for a six-year-old.

Suspenseful bridge.
Garbage disposal vs measuring spoon. I would say you should see the other guy, but this is the other guy.
Dam!
Washed-out late afternoon.
Who has four paws and just turned 20?
Giant asparagus.