It was still dark when my son woke me up, crying.

“Shhh, shhh, honey,” I soothed, stroking his hair. “Do you want to nurse?”

I knew his claim that I had no milk wasn’t literally true—not only did I still have milk, on nights when he slept through without nursing, I often still had to get up and express milk into the bathroom sink because my breasts were full and sore—but I also knew that he meant something beyond the literal meaning of his words. Nursing is never just about the milk.

My daughter nursed for the last time when she was three years and three months old, and I just assumed that my son would nurse even longer. I’d read about breastfeeding duration in other cultures and I’d concluded that, if I didn’t push him to stop nursing (as I had my daughter), he’d keep nursing until he was five. While it seems a little silly to think that a child who stopped nursing at three years and eight months had weaned “early,” that’s how it felt because it happened so much earlier than I expected.

Beyond this, my son’s weaning was also more emotional for me than my daughter’s because I knew that, most likely, I was done nursing babies.

He’s still a snuggly guy, which helps. When he climbs into bed with me in the middle of the night, he tucks his little arms around my neck and falls asleep with his face against mine, his breath warm against my cheek. He still wants me to hold him and snuggle with him while we read books. But I know that’s on its way out, too.

He no longer wants me to kiss his boo-boos, and has begun ignoring me when I offer to hold his hand. He follows his sister out to play with the “big kids” in the neighborhood. He’s sounding out and writing words all over the house (mostly on paper, but not always). He spends hours making up stories in his play room. He dresses himself and at bedtime folds his clothes for the next day and sets them neatly on the little blue chair next to his bed.

And it’s a good thing, really. It shows that my son is maturing and that he’s growing in his confidence and independence. But it’s sad, too, because I’m saying goodbye to him as a baby. I don’t cling to his babyhood—nor do I want to; there’s a distinct advantage to having a child who can entertain himself and wipe his own bottom—but I do feel a deep sadness that it’s over.

Each “first” is accompanied by a “last.” The glass is both half full and half empty, and just letting both of those exist simultaneously is a constant challenge.

I do look forward to meeting him. 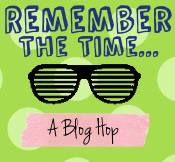 Written as part of the Remember the Time Blog Hop.

8 Replies to “A Progression of Farewells”