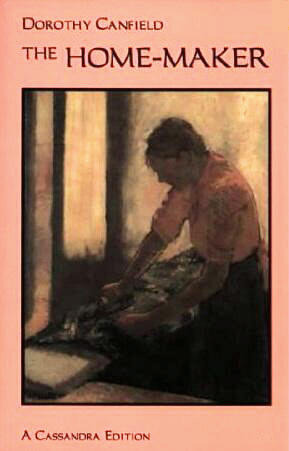 One of the linchpins of the utopian society Plato describes in his Republic is the notion that each person should do the job for which she or he is best suited (and that there is a job for which each individual is best suited). This is one of the foundations of societal harmony. In The Home-Maker, Canfield Fisher shows us first what life is like for a couple engaged in the roles society would have them play, and then in the roles for which they as individuals are best suited. The difference in the family in these two scenarios is striking.

For about the first half of this book, I thought the writing was rather simplistic and that the plot came together just a little too easily (“Sure, you’ve been out of the workforce for more than a decade, but it just happens we have a job opening that would be perfect for you, Mrs. Knapp…”), but then I realized that the point isn’t just to tell the stories of two individual human beings, but to use these individuals as allegories. They represent, first, people trying to cram themselves into a prescribed mold (what to do with the bits that hang over?), and, then, people who manage to find just the right fit. It reads somewhat simply, but there is so much behind the words on the page.

As I read this book, I kept coming back to this idea of it being necessary for one to be somehow crippled or diminished in her capacities to be a good home-maker. Mrs. Farnham is a sweet, even-tempered wife and mother, but she’s a little slow on the uptake. Evie’s a real live-wire, and she’s going nuts as a home-maker and taking everyone with her. And then there’s Lester, who is a fantastic home-maker and is crippled both by his lack of ambition and a spinal cord injury. It seems that a woman is assumed to be less-than and so she belongs in the caregiving role, but in order for a man (in 1924) to give up a paying career for the work of caring for family and home, he has to have a bigger something wrong. In order for a man to be accepted by society in the home-maker role, he has to have a reason beyond his desire to nurture his family; he needs to have no other options.

In the 91 years since The Home-Maker was published, it’s become more common for a man to stay at home with his children (and he doesn’t need to relinquish the use of his legs to justify his choice), but it still raises eyebrows. Today it seems like both men and women have to justify their decision to give up paid work for the home-maker role. If our goal is to let people live their lives the way their hearts and intellect and individual situations tell them, we still have a long way to go.

With all of these gender roles and what happens when what our hearts pull us towards isn’t one of the options society has deemed acceptable, I expected this book to be more heavy-handed than it was. Canfield Fisher does a brilliant job of taking the reader inside the minds and hearts of her characters. She doesn’t say that wage-earning or home-making either one is better, but rather that each person should have the freedom to choose the path that is right for him or her. After Lester and Evangeline trade roles, Canfield Fisher shows very vividly what Evangeline loves about working at the store and what Lester loves about being at home. Each of their roles fans the spark of passion in their individual hearts, and so the situation works in a way not even imaginable before the switch.

My favorite chapter was the one in which we see what Lester loves about being home with his children. We watch him watch five-year-old Stephen trying to figure out how to use an egg beater. This struck me as very Montessori, and so I wasn’t surprised to learn that Canfield Fisher is credited with bringing Montessori methods to the United States. It also struck me because one of the things I like best about being home with my children and homeschooling them is that we have the time to just be and for me to observe them just being. When I’m in the right mood, I find it transcendent to watch my children—and any child, really; I’m just around my own much more than anyone else’s—identify challenges, get frustrated, and work through them to the triumph of discovery at the other side. Lester’s experience watching Stephen reminded me of what wonderful things can happen when I let the to-do list go and bring my awareness to the incredible human beings with whom I share my life.

Even if you’re not interested in this novel, I recommend picking it up just for Canfield Fisher’s article “Marital Relations,” which is reprinted in its entirety in the front of the book. (This is in the 1983 “Cassandra Edition” from Academy Chicago Publishers.) I read it and then read it aloud to my spouse, and we were both blown away, not only because it seemed so far ahead of its time (it ran in the Los Angeles Examiner in 1924), but because it was just a wonderful viewpoint. For example, Canfield Fisher suggests that the very best thing we can do for married couples is to leave them alone.

“We could let them alone; we could let them, without comment or blame, construct the sort of marriage which fits best in their particular case, rather than the sort which fits our ideas. We could leave them to struggle with a problem which, under the best circumstances, requires all their intelligence to solve, without crushing them under the weight of half-baked certainties and misquotations…”

And that’s just a taste of the awesome. (I think we could totally apply this suggestion to other people’s parenting choices, too.)

Thanks to Jenny and Teresa at Shelf Love for reviewing this book and thereby letting me know about its existence.

This was the January 2015 Sisters Book Club selection. For February we’re reading Purple Hibiscus by Chimamanda Ngozi Adichie. Visit our Goodreads Group if you’d like to join the discussion!

One Reply to “The Home-Maker by Dorothy Canfield Fisher”