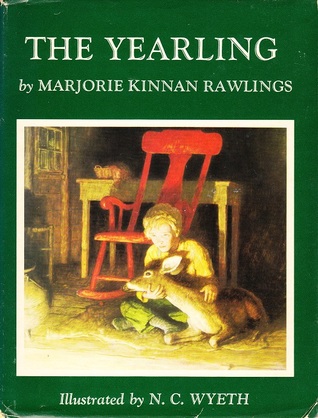 Every night for three weeks, my nine-year-old and I snuggled together under a blanket, tea cups balanced on our laps. I read aloud in what my spouse says was a pretty good Southern accent and she read along silently over my shoulder.

After we’d finished the book and blown our noses and she’d talked a bit, I realized that she and I got different messages from the story. She loved it for the outdoors and the animals—both the cute baby animals raised by Fodder-Wing and Jody and the animals who threatened to kill them, directly or indirectly. When she cried, she cried because there was no clear right path for Jody to have followed. Should he have taken the fawn in or should he have left it? Neither seemed like a good plan in the end.

When I cried, I cried because as a parent, there’s no clear right path for raising my children. Penny, like many (most?) parents, tried to protect his son from the ills of his own childhood. He kept Jody from hard work and hunger, shielding him always from the ugly ways of people, a buffer between his son and reality. This spared Jody pain when he was young, but it left him unprepared for the life of an adult. The boy couldn’t read or write well or light a fire on his own or carry home a carcass after a hunt. Adulthood comes, though, whether we’re prepared for it or not. And so when I cried, it was in part for that remembered pain of crossing the threshold between childhood and adulthood and realizing there really was no magic to it after all, but it was even more for the constant and anticipated pain of knowing that no matter what I do for my children, they’re going to have to suffer in order to grow. I can’t get them out of that any more than I can get myself out of my own growing pains.

Even if I could keep them from feeling pain or sadness or fear as children, that would only leave them as adults with a sense of entitlement toward anything good in their lives and a sense of unfairness for any discomfort. They’d be as whiny as Jody was before his coming-of-age except they’d be trapped in it, perpetual children.

My take-home message from this book is that the way to help my children grow to be capable adults is to get them a wild animal to raise so it can betray them and so open their eyes to the betrayals they can expect from life every step of the way. Or since I live in the suburbs, maybe I can accomplish something similar by allowing them to make their own mistakes and feel their own embarrassment and fear and pain and just be there for them when it happens instead of trying to keep them from feeling it in the first place.

One Reply to “The Yearling by Marjorie Kinnan Rawlings”