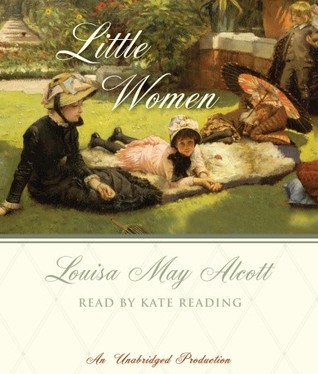 I can’t remember how I felt about this book last time I read it, but listening to the audiobook with my kids this time while we reheated leftovers for lunch, or worked puzzles and built with Legos on the kitchen floor, or drove through the snowy Massachusetts countryside, I oscillated between loving it and just feeling bored with the book.

Part I of the book is definitely better than the second half and contains my favorite chapter of the book, where Marmee confesses to having a constant battle with her temper and counsels Jo about how to manage her own reactionary anger. As someone who can be a bit feisty, I always find that part hopeful. Maybe one day my kids will say, “We can tell you’re angry, Mother, when you press your lips together and leave the room.”

In general, though, the March women are too good to be true, particularly in the second half, and the book’s a lot longer than it could be. There’s a lot that could be cut, including the entire last chapter. I didn’t care for the lengthy epilogue and think the book should have ended with Jo walking into her happiness. (I hope that’s not a spoiler. Can there even be spoilers when talking about classic literature?)

Kate Reading did an excellent job as narrator, and I would seek out other audiobooks she’s voiced. I do wonder about the accents, though. What’s the evolution of the Massachusetts accent, and how would it have sounded during the second half of the nineteenth century? I didn’t really hear any trace of it here except in the twins’ toddler-speak (tacking R sounds at the end of words that would normally end with an “a”, like “mama” and “papa”), but I would think it would have to be there in some way. Given the March family’s “wealthy people fallen on hard times” story, mightn’t they have had the aristocratic version of the Boston accent?

Maybe once my kids grow up, I’ll do a study of the likely accents of characters in classic literature. Or if someone’s already done such a study, I’ll make the time to read their book.