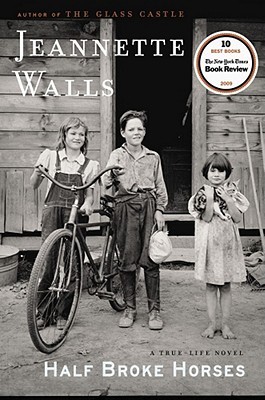 Half Broke Horses by Jeannette Walls
My rating: 3 of 5 stars

Half Broke Horses was the April SBC selection. Visit our Goodreads Group to discuss this book or any of the other books on our list. Or join us in reading May’s selection: St. Lucy’s Home for Girls Raised by Wolves by Karen Russell.

My grandparents all have interesting stories. My maternal grandmother grew up in West Virginia and used to tell about how they brushed their teeth with salt instead of toothpaste and washed their hair in kerosene when they got lice. My paternal grandfather left Spain at age thirteen when the Spanish Civil War was heating up and swears he met Ernest Hemingway while waiting to board the ship to the States. Last year I discovered that my paternal grandmother’s family have lived in the North Carolina mountains for three hundred years; I just know there are some interesting stories there.

For years I’ve considered putting together these stories, either with the help of my dad and my sister or on my own, but I was always discouraged from proceeding with any of these in part because I felt bad picking one grandparent’s story over another’s, but more because it’s never been clear to me which stories are factual and which are embellished to the point that they’re more accurately described as fiction. And then there would be the difficulty of piecing together all of the disparate tales so the story read as a single work rather than a cobbling together of recollections.

In Half Broke Horses, Jeannette Walls surmounts all of these obstacles to create an interesting, readable story written in the voice of her inimitable grandmother.

Lily Casey Smith was clearly a rough-around-the-edges woman, but I found her mostly likable and enjoyed reading her story. Aside from the interest I took in Walls’ decision to couch her story as fiction and how that freed her as a storyteller, my favorite part about this book was the description of the setting. Lily Casey Smith doesn’t romanticize the Southwest, but she clearly loves it and is a part of it. Seeing Arizona, New Mexico, and Texas through her eyes made my heart yearn for sparsely populated open spaces (if not for scorpions and lack of water). I was daydreaming about a western road trip before I started reading, and now that I’m done with the book, I really want to hit the road (watching the movie Crazy Heart this weekend also contributed—how I miss those wide, open skies!).

The only trouble I had with this book was that the stories sometimes didn’t flow one into the next as smoothly as they might have, and especially towards the end, the narrative seemed to speed up and lack the lush detail it had earlier in the book. In a way, this reflects the way that time speeds up as our children get older, that uncanny way time has of rushing by each time we blink, but I still felt a little disappointed. I wanted more from that last third than was there. At least I can follow it up with The Glass Castle.

One Reply to “Half Broke Horses by Jeannette Walls”