Howards End was the July SBC selection, and finishing it, I’m no longer behind on my reading for my own book club! Check out the SBC page for the titles we have coming up and to look through the ones we’ve already read. You can join the conversation in the comments or in our Goodreads group. 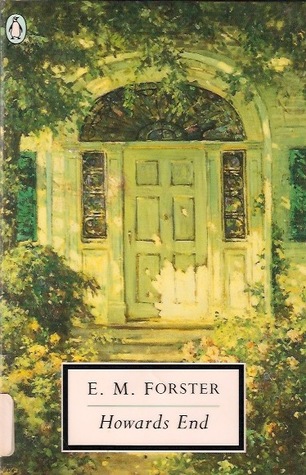 This novel is beautifully written and, for a book written before World War I, surprisingly relevant to today’s political and social climate. The central conflict seems to be between Margaret’s ideals and how these manifest in real life. She is intellectual, well-educated, and has a strong will, which makes it disappointing to see her make choices that seem counter to these aspects of herself. I felt so irritated with her for some of the mistakes I saw her making, for seeming to choose bad relationships over good ones, but in the end, she seems to come to a place of compromise that is better for (nearly) everyone involved than what would have been available had she dug in her heels from the beginning.

The novel seemed to be gearing up for a grand confrontation and dramatic decisions, and so at first this compromise ending was unsatisfying to me. But upon reflection, I decided that the ending is all the more realistic for the lack of fireworks. Gradually I saw that the decisions Margaret made that were so frustrating to me were frustrating because they’re the kinds of decisions I think anyone makes who has ideals and also lives in the world. It’s more satisfying to read about people bucking convention, throwing off everything they once valued and making a clean breast of it as a shiny, new person, but it’s not realistic. We can make changes, but we don’t really become new people, or if we do, it’s a slow metamorphosis and one governed by forces outside of our control, contrary to the promises of self-help books, talk shows, and websites selling fitness programs (and I don’t mean religious or supernatural forces, but the natural forces of biology, economics, politics, environment, and genetics through which we all muddle as best we can).

Compromise doesn’t trigger the dopamine release that I crave, and it doesn’t feed the desire I still feel despite my constant efforts to the contrary to see punished people I think have done wrong, but it provides a much more loving and sustainable model for change than the dramatic ending. Only connect.

Some quotes that spoke to me (page numbers from the 2000 Penguin Books paperback edition):

p. 52: “I’m tired of these rich people who pretend to be poor, and think it shows a nice mind to ignore the piles of money that keep their feet above the waves.”

p.91: “Actual life is full of false clues and signposts that lead nowhere. With infinite effort we nerve ourselves for a crisis that never comes. The most successful career must show a waste of strength that might have moved mountains, and the most unsuccessful is not that of the man who is taken unprepared, but of him who has prepared and is never taken…Life is indeed dangerous, but not in the way morality would have us believe. It is indeed unmanageable, but the essence of it is not a battle. It is unmanageable because it is a romance, and its essence is romantic beauty.”

p. 128: “The feudal ownership of land did bring dignity, whereas the modern ownership of movables is reducing us again to a nomadic horde. We are reverting to the civilization of luggage, and historians in the future will note how the middle classes accreted possessions without taking root in the earth, and may find in this the secret to their imaginative poverty.”

p.132: “I don’t believe in suiting my conversation to my company. One can doubtless hit upon some medium of exchange that seems to do well enough, but it’s no more like the real thing than money is like food. There’s no nourishment in it.”