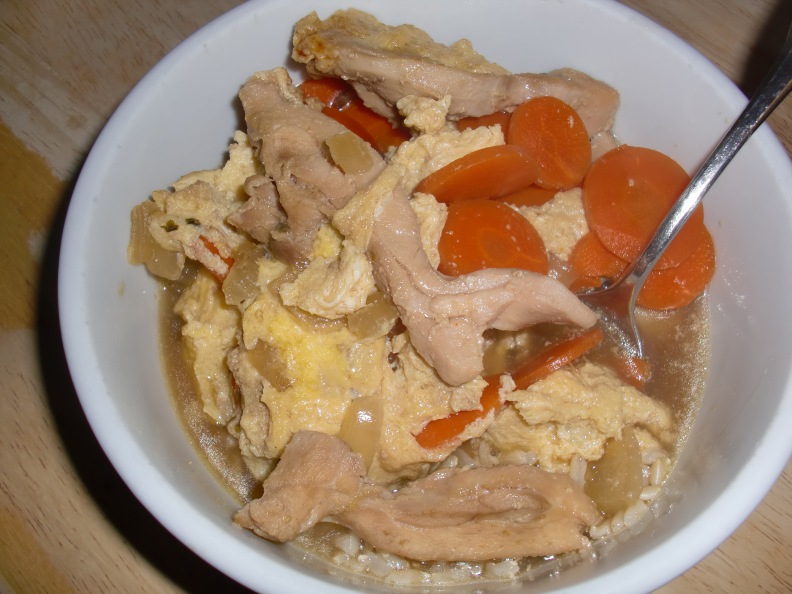 Oyako donburi means “parent and child rice dish.” It’s called parent and child because it has both chicken and egg in it. If you make it with beef and egg, it’s apparently called “stranger and child” which sounds kind of ominous. I’m thinking since I used turkey broth in it, I could call it “parent and child and cousin,” but I’d have to call it that in English because I don’t know the word for “cousin” in Japanese.

Oyako donburi is another dish my friend Amanda shared with me. She’s taught me a number of awesome Japanese dishes, even though neither of us is Japanese. She did live there for a period of time and can speak the language, which is more than I can say for myself. I just like the food. Of the language, I only know what I’ve gathered from cooking and the Buddhist temple (and I usually mess those up when I try to say them).

My recipe is a combination of Amanda’s, one from My Kitchen, and some modifications I made based on what was in my kitchen (ie, it called for dashi and I didn’t have that or the stuff to make it, but I did have homemade turkey broth in the freezer. And I didn’t have green onions, but my kids don’t like green onions anyway).

At any rate, my family loved it (except for my daughter who didn’t like the “oil” even when I told her there was no oil in it. “Whatever it is, I don’t like it,” she proclaimed). My husband said, “Oh! It’s Japanese comfort food!” And it was incredibly easy to make. 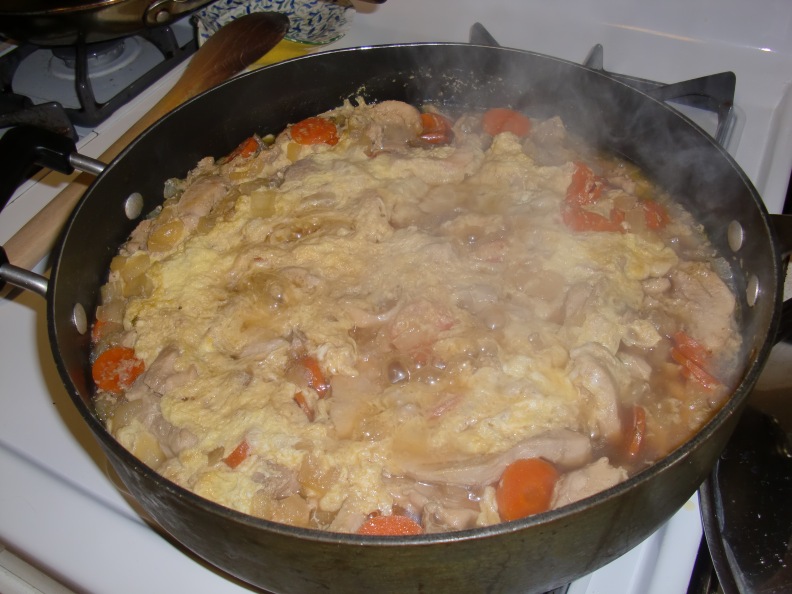 Prep time: 40-60 minutes, less if your rice is already cooked and you don’t have to thaw your broth.

1 quart turkey broth (you could use chicken broth or dashi or veggie broth or mushroom broth. I probably could have gotten away with 2-3 cups broth)

1. Bring the broth, soy sauce, mirin, and sugar to a boil in a large skillet or saucepan. Allow to reduce slightly

while you’re prepping the other ingredients.

2. Add the chicken pieces, carrot and onion and cook until done (I don’t know, about 15 minutes?).

3. Gently pour the beaten egg over the top and cover tightly. Let cook until eggs are set to your taste. I like mine well, well cooked, but there seem to be people online who like runny oyako, which pretty much turns my stomach to think about.

4. Spoon rice into each individual bowl and spoon the oyako over the rice. Enjoy!