Last night, I made cupcakes.

And no one’s eating them. All because my daughter came down with a stomach bug overnight. Then my son caught it. Now I’m listening to Elmo in the background (because on “sick” days I remove all screen-time regulations) and wondering when/if the bug is going to hit my husband and me.

I made them for our Girl Scout group. It’s a “group” rather than a “troop” because we’re homeschoolers and we like to do things unconventionally. All of our girls are registered as Juliettes (scouts unaffiliated with a troop). They range in age from first-year Daisies to second-year Juniors and meet twice a month to do chaotic but very fun activities led by not one or two Leaders, but by all of us. By consensus. By some kind of miracle.

Today, we—or rather, they—are meeting to celebrate the 100th Birthday of Girl Scouts in the United States (which is a little redundant since all of the rest of the world has “Girl Guides,” but I can’t expect everyone to be up on the history of scouting). The first Girl Scouts were inducted into the organization on March 12, 1912. Or at least that’s the official date. Apparently Daisy (Juliette Gordon Low, founder of the Girl Scouts) wasn’t big on record-keeping. Some place the actual date on March 9, others on February 18. But the official birthdate of Girl Scouts is March 12th. (This is all from the new biography of Juliette Gordon Low, Juliette Gordon Low: The Remarkable Founder of the Girl Scouts by Stacy Cordery, by the way).

A side note (as if this entire post isn’t just a series of side notes), Juliette Gordon Low was a big proponent of teaching girls to play basketball and to shoot guns. Had they combined these two activities, they might not have had to put up canvas blankets to shield the girls from the view of adult males who made inappropriate comments about the basketball-playing females.

At any rate, today’s the day our group is celebrating the 100th Birthday of the Girl Scouts. And for that celebration, I made cupcakes. Vegan cupcakes. And, for the first time ever, I got vegan cupcakes that are also gluten-free to come out edible and cupcake-shaped. They’re a little denser than the non-gluten-free ones (more the texture of a corn muffin than a cupcake), but they taste incredible (even though I’m not officially eating sugar, I decided to taste one last night, just to make sure they were good enough to share with the girls this morning).

But since the child who helped bake the cupcakes threw up a few hours later, the group opted for a cupcake-free celebration this morning. Not that I blame them. But now what do I do with these cupcakes?

My daughter says she’s not going to eat any even once her tummy feels better because she’s been getting tummy aches from sweet things lately (which is true. I don’t know why, but there certainly seems to be a correlation between sugar and tummyaches for her lately). My son wants to eat a cupcake right now, but it’s not been long enough since he got sick last to give him solid food. I just finished a load of sick-day laundry, and I’d rather not do another one quite so soon. I’m not eating sugar, my husband’s at work, and no one else wants these awesomely delicious but potentially contaminated cupcakes.

They look so stoic in their despair, don’t they? 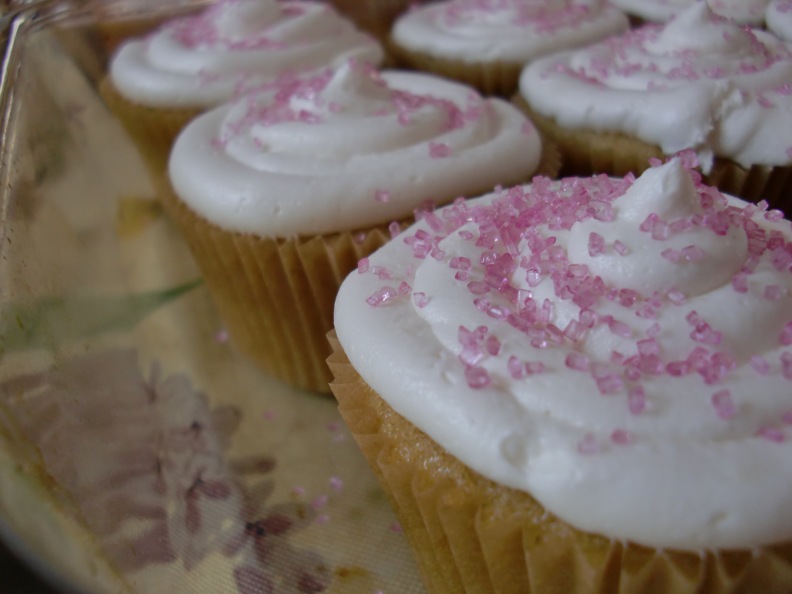 If you would like to make these same delicious cupcakes in your own home, grab yourself a copy of Vegan Cupcakes Take Over the World by Isa Chandra Moskowitz. I recommend buying yourself a copy instead of always checking it out from the library because it might happen that you volunteer at the last minute to make vegan cupcakes and the book isn’t available at the library and then you have to ask your friend Jenny to send you the recipe because even with expedited shipping, the book won’t arrive fast enough to bake the cupcakes in time to languish on your table uneaten because your kids are sick. Your friend Jenny will pull through with flying colors, by the way, but you still might want to buy the book because you ought not to ask her to transcribe all of the recipes you will want to make from it.

These are the Golden Vanilla Cupcakes with Vegan Fluffy Buttercream Frosting. To make the gluten-free ones, just sub out some type of gluten-free flour for the wheat flour (I used rice flour and garfava flour). No xanthan gum necessary! If you make these yourself, note that the batter for the GF ones is not so tasty, even though the cupcakes are super yum. So don’t worry when you lick the beaters; just put the cupcakes in the oven, confident that the baking process will bring out the yumminess.

Moskowitz has a recipe for a gluten-free cupcake in her book, but that one didn’t come out for me.

I consulted the owner of the vegan bakery I love in Salt Lake City (Cakewalk Baking Company), and she suggested I just sub out the flour in Moskowitz’s regular recipes and that’s what worked. Once everyone is well, I might just work my way through the book, making GF versions of every single one of the cupcakes in there. And then giving them away since I’m not eating sugar.

4 Replies to “Why Are the World’s Best Cupcakes Languishing On My Table?”