I’ve been cautiously venturing into the world of savory smoothies the past week or so.

The first several I tried were…suboptimal. So suboptimal that I found them nearly undrinkable. I was discouraged and nearly gave up.

But while posting about savory smoothies last week, I found a link to Tess Masters’ blog, Healthy Blender Recipes. There I found savory smoothies that were not only palatable but delightful. I liked them so much that at the end of the week when I started adding fruit back into my diet, I tried out some of her sweet smoothies (and continued to drink the savory smoothies). I’ve been sending links to her blog left and right, and I figured I ought to just cut to the chase and blog my praises.

But first, a couple of general notes about green smoothies:

2) Savory smoothies are best very, very cold and fresh out of the blender. I also prefer to drink mine through a straw. I’m sensitive to textures and this helps me get past the sometimes off-putting thickness of a smoothie with avocado in it.

And now on with my Healthy Blender Recipes smoothie love-fest! These are a few of my favorites with links to her recipes accompanied by my notes and photos. 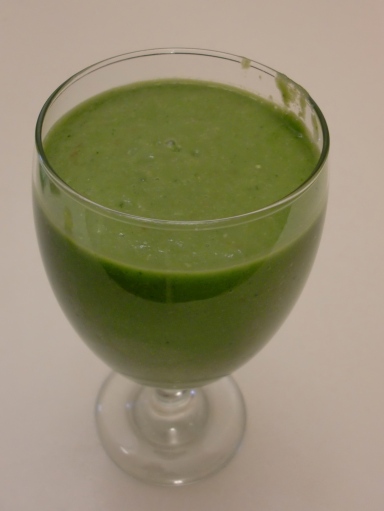 The only change I made to this recipe was to omit the sprouts because I didn’t have them handy. I really loved the salty, garlicky flavor when it was first blended. Two problems, though:

First, my daughter didn’t like my garlic breath after I drank it. I just made a point not to breathe/burp on her and that solved that.

Second, this recipe made a ton of smoothie…EIGHT CUPS! It almost overflowed my Vitamix. I could only drink about half of it at breakfast. I put the rest in the fridge, but when I came back to it at lunch, it had grown unpleasantly bitter. When I make this again—and I will make it again—I will halve the recipe unless I have two or three other friends over to share with me.

This one is the first of Tess’s smoothies I tried. I’ve had it twice this week. It’s spicy and tangy and thick. Drinking it is kind of like drinking a spicy guacamole. I didn’t use roma tomatoes; instead I used the cherry tomatoes and “Garden Peach” tomatoes from my garden.

Tomato Tangent: The Garden Peach tomatoes have coloring similar to a peach and even have fuzz on the skin. I think they’re cute, and they’re very tasty, although it’s possible that their yellowish color contributed to my smoothie’s not-so-appetizing hue. (It might belong better on a “50 Shades of Ochre” post.) 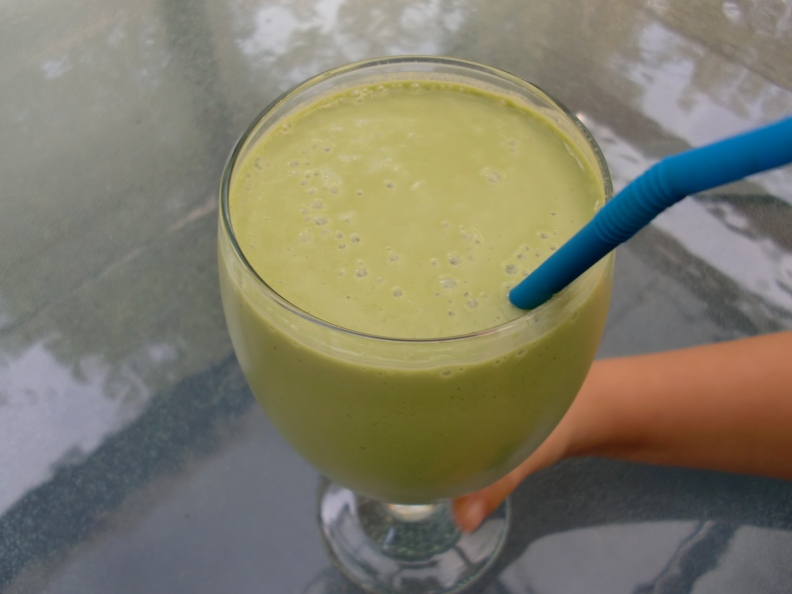 The recipe calls for agave syrup or dates, but instead I used stevia to sweeten this smoothie so as not to add any more sugar. Maybe that’s why it tasted more like bubble gum to me than pistachio. It was still very, very good. So good, in fact, that I’ve made it twice and both times I’ve finished the whole thing before my husband has been able to try it. The second time I even accidentally put in double the kale and it was still delicious. I’ve made it both with almond milk and with the water and cashews, as called for in the recipe, and both are fabulous.

This, friends and neighbors, is the best of the four smoothies I’m featuring from Healthy Blender Recipes today.

It is so good that my husband—the man who merely tolerates my green smoothie obsession and the resulting greens overflow from our refrigerator—loved it. “Wow!” he exclaimed when he tasted it after his run the other day. “This is really good!” Then, cautiously, “What makes it green?” And he kept drinking it even after I told him what made it green! (Romaine lettuce in this one.)

It is so good, in fact, that we drank it down before I had a chance to photograph it. I’m planning to make it again this weekend when the bananas are riper, and I promise to do a smoothie photo shoot and update this post with an image.

UPDATE: I took a picture when I made this smoothie again tonight! It turned out greener this time than it did last time. I used local romaine this time; maybe it was greener than the lettuce I used last week. 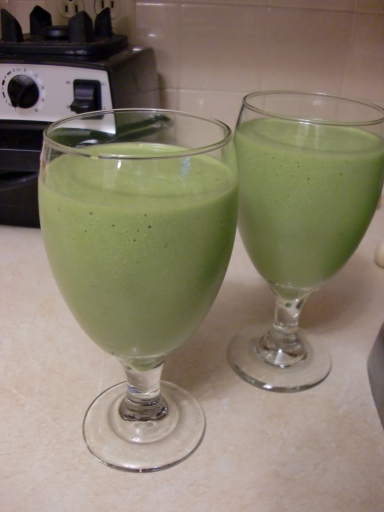 I admit, the title of this post is a bit misleading since I’m only featuring four green smoothies rather than fifty, but these are so good, they’re sure to keep you busy for a while. (And “50 Shades of Green” just sounds better than “4 Shades of Green.”)

If you get through these and want more, be sure to try out Tess’s other blender recipes. I plan to treat myself to a mocktail from one of her recipes this weekend. Or…maybe before the weekend.

10 Replies to “50 Shades of Green: Savory (and Sweet) Smoothie Roundup”