ROW80: I’ve only written once this week so far and that was on Sunday. I really don’t do well without a routine. Everything kind of falls apart. Which leads me to…

Homeschool Fall Break, Day 3: Everything’s kind of falling apart. I managed to post a 1,600-word blog post about kids in public places, baked popovers and “cupcakes” (actually oatmeal muffins. I tried to trick my kid into thinking they were cupcakes. It didn’t work. Probably because I omitted the sugar), and finished my daughter’s kangaroo costume (except the gloves and spats) while half-watching a History Channel documentary about the American Revolution. (Side-note on that: That would make a great drinking-game film if I ever re-enter the drinking-game stage of my life. If you took a drink every time they said, “rag-tag,” you’d be absolutely wasted before the second segment of the film. Is it a state law or a federal law that films and literature about the American Revolution must always describe the rebel army/militia as “rag-tag”?)

I did not, however, prepare anything remotely resembling a meal today. We ate popovers and cucumber slices and dry cereal. My kids watched a couple of hours of PBSkids.org while I sewed. I did no dishes. I didn’t even get out of my pajamas (but I have a cold, so that’s my excuse). My daughter did do flute practice and a math lesson, though, so there’s that. And we played with Legos. And cleaned up cat vomit. It was a regular party here today, come to think of it.

Will I write tonight? If I had a Magic 8 Ball I could give you an answer to that one. Chances are I’ll just fall asleep with my toddler again. And that’s totally fine by me. 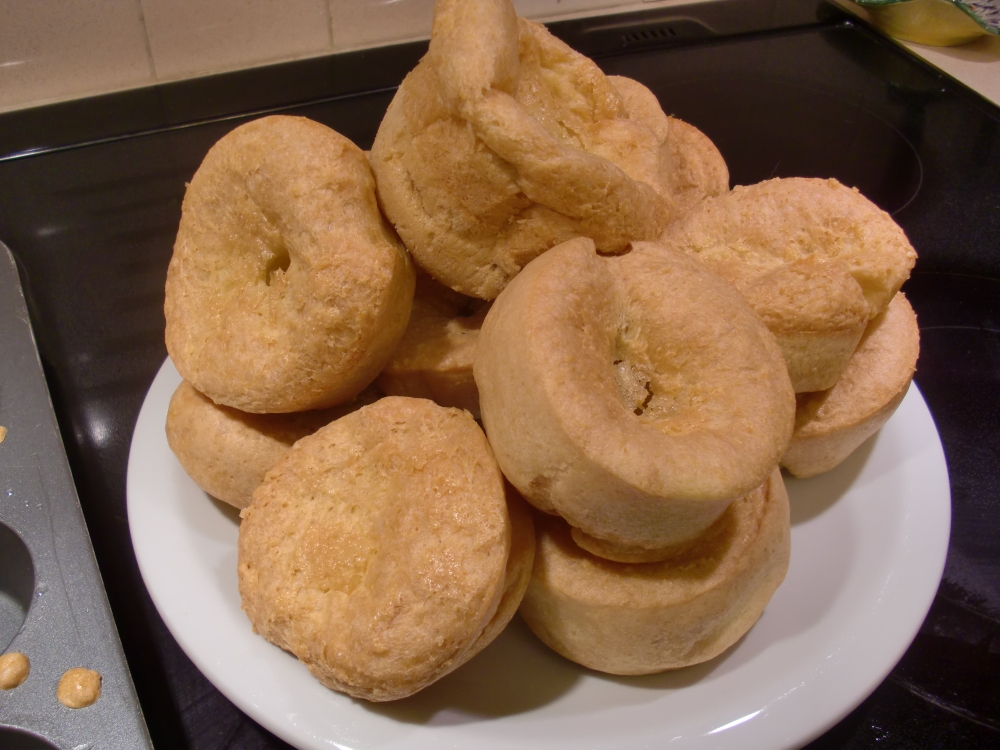 Popovers. Gluten-free and dairy-free, but I didn’t need to modify them for high altitude baking this time!

My blender modeling the hood of the kangaroo costume. It reminds me of the rabbit in the movie Donnie Darko.

Not sure what this guy is (cucumber beetle, maybe?) but it was in with our CSA veggies this week.
New monarch warming her wings.
Winter monarch, almost ready to emerge.
Took a trip to Medieval Times where we saw dramatic displays of chivarly.
Why yes, we did center our trip to the second largest city in the U.S. around a visit to the library. What else do people go to LA for?
The amount of coconut milk left in the jar I just took out of the fridge. "Have a nice day!"