“I’ll be done in a second, honey.” She tries to soothe him without looking away from the screen. “I just want to publish this post.”

Undaunted, her son ups the ante: he grabs her forearms and pulls.

It’s times like these when CJ wonders why she blogs. 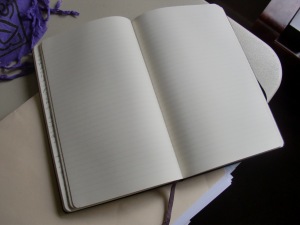 From the moment of her first creative writing lesson in third grade, through her B.A. in English with a creative nonfiction writing focus, to her first-person blog today, CJ has enjoyed writing personal essays.

“It’s like how I feel about traveling. I feel like there’s so much I haven’t seen here, it seems a pity to ignore the United States to see other countries. It’s not that I don’t want to see other countries because I really do; it’s more that I want to delve deeply into the one I know best so as not to miss anything before moving on. It’s similar to what happens with my writing. There’s so much I want to explore from my own perspective, it’s difficult to get myself to branch out and explore the perspectives of fictional characters. And,” she adds, “I already know the language here.”

That’s not to say that CJ hasn’t aspired to write fiction. Literary fiction is her favorite genre to read, and she often feels the desire to create something similar to her favorite books and short stories. She has a few persistent characters swimming about in her head, and she even completed 50,000 words of a novel for NaNoWriMo in 2010. Short for National Novel Writing Month, NaNoWriMo is the literary equivalent of a marathon, in which participants challenge themselves to complete a 50,000-word novel in the month of November. CJ estimates that her novel was about one-third written when she reached 50,000 words, but she’s not gone back to it to complete the remaining two-thirds.

“I’m really deadline focused,” she explains. “I try to keep to a schedule so I can be more consistently productive with my writing, but it’s not something I can maintain without some kind of external deadline.”

In 2000, CJ founded a writing group in North Carolina, where she was living at the time. It was a very productive time for her, and she credits that productivity to needing to have something to submit for critique every six weeks or so.

“I’ve not had a writing group since 2003 [when we moved from North Carolina], and I’ve not been nearly as productive with my writing,” she says.

Despite this claim of low productivity, CJ has been remarkably consistent with her blogging. She blogged every single day of 2011, and although she’s slowed down a bit in 2012, she continues to publish 2-3 times a week or more.

“I’m not sure why that is,” she says. “I guess blogging doesn’t feel like ‘writing’ in the same way that an extended project does. It’s more like an ongoing conversation.”

A conversation with other people or with herself?

Imperfect Happiness has a solid following—168 blog followers and 208 Facebook followers to date—but its page views can be erratic.

“I can’t really tell what people like about my blog,” CJ admits. “Maybe they just like to read about someone who’s floundering about and asking some of the same questions they are.”

Her readers do seem to appreciate the authentic, first-person voice of her blog, but they are divided about what subjects they prefer.

Her recipe posts get the most page views, but her more controversial posts get more comments, which is what CJ says she likes best about blogging. She explains that, while she didn’t take into account the social aspect of blogging when she hit “Publish” on her first post, that aspect has turned out to be very rewarding, especially when the comments are particularly rich.

“It really enriches the experience for me and gives me a sense of connection that’s missing when I’m by myself at the computer. I get especially excited when someone I’ve blogged about—like the author of one of the books I’ve reviewed or the subject of one of the NPR pieces I’ve referenced—takes the time to comment, and we get into a little bit of a conversation. But I love it anytime comments conversations happen.”

CJ started out blogging her progress on a “happiness project,” inspired by Gretchen Rubin’s bestselling book. Gradually she branched out to include recipes; book reviews; a sporadic series called, “You Know You’re a Crunchy Mama When…”; daily off-the-cuff musings; photo posts; posts filled with existential angst; posts about writing; and the occasional post in response to one of the Weekly Writing Challenges put out by The Daily Post. Her book reviews come in last in popularity, but her style of injecting book reviews with her personal experience has attracted a loyal following.

Imperfect Happiness has something for everyone, but not everyone likes any one something.

“If I defined my blog’s identity a little more clearly, and wrote shorter posts, I might be able to attract more readers, but…” she shrugs her shoulders. “I feel pretty comfortable with how things are now. People who like what I have to write, read. People who don’t? Well, I guess I’m not writing for them.”

And that three-year-old begging his mom not the look at the “’puter”?

CJ tries to do most of her blogging when her children are asleep, but sometimes the bug just bites before bedtime arrives.

And that might just be the best explanation for why she keeps blogging.

This post was written as part of The Daily Post’s Weekly Writing Challenge for the week of December 3rd.