For Christmas, my children got a toy store gift card from their great-aunt and great-uncle. After wandering slack-jawed around the enormous store for an hour, dazed by the abundance of colors and characters and videos about Legos, and astounded by the kid-sized Camaro they got to pretend to drive, they’d finally selected their $25 each of toys, and we made a beeline for the checkout before they could change their minds. My son chose a medical kit (which he insisted upon calling a “magical kit”) and three weirdly squishy animal toys—an ankylosaurus, a spider, and a frog, all of which were roughly the same size. My daughter came home with a set of double-nine dominoes, a bead loom, and visions of all of the beautiful bracelets and rings she would create.

That afternoon we set up the bead loom, thinking I could get her started and then she could bead while I cooked dinner. After spending an hour scrutinizing the instructions and having our blood pressure and heartbeat checked repeatedly by my son, I could barely figure it out. We were both becoming frustrated, and I still hadn’t started dinner. So we left the bead loom on the table, all set up with seven strands of thread secured across the loom and one two-inch beading needle threaded with a twelve-foot piece of thread ready for us to add beads after supper.

But after we ate, we could find only about four of the twelve feet of thread and no needle. We searched high and low. We tried to remember everything that everyone had done both before and after we broke for dinner. All four of us swept and crawled and cursed (okay, it was mostly me who cursed). Eventually, I just replaced the thread and found a shorter needle in my sewing kit that was fine enough for the tiny seed beads. My daughter and I strung three rows of beads and then set the loom aside. I hoped that, when we found the needle, it wouldn’t be with our feet, and promptly forgot about the needle and thread.

Last Thursday, nearly a week after we’d last worked on the bead loom, I was awakened by children yelling and Maurice, our sixteen-year-old cat, meowing just outside my bedroom door. I rolled out of bed and briefly considered putting my workout clothes on right away so I could exercise before I had a chance to reconsider, but instead just padded out of the bedroom in my bathrobe and slippers.

I noticed right away that something stunk. I set about trying to locate the origins of the smell and quickly determined it was emanating from the cat who was weaving about my legs and meowing. Sometimes our cats have trouble with personal hygiene, and I figured this was what was going on with Maurice.

Here, I will interrupt myself. I know that it’s vivid details that really bring a story to life; however, some stories are better left to the imagination. So, to the conclusion:

Eight feet of string and a two-inch beading needle passed all the way through my elderly cat’s digestive tract without causing him any apparent damage.

I’ve waited a couple of days to tell this story because I was afraid that he would start passing blood or would exhibit signs of shock, something I just learned about last month in my pediatric first aid course and which I hoped I could recognize in its feline form. But he seriously seems fine. He’s eating well, has as much energy as usual, is using the litter box fine, all of which I just can’t quite believe given how royally I screwed up my kitty-parent duties.

Screw-up #1: I should never, ever, ever have left twelve feet of thread unattended, with or without a needle. If swallowed, thread alone can kill a cat, much less that much thread attached to a two-inch needle.

Screw-up #2: I never seriously considered that my cat could have swallowed eight feet of string and a beading needle. This screw-up, however, might have saved his life in this case. Had I thought he’d swallowed it, I’d have taken him to the emergency vet and they’d have done x-rays and surgery and who knows if my geriatric cat would have survived anesthesia. I would not advise just waiting for a needle and eight feet of thread to show up at the other end of your cat, but in this one individual instance, it might have been the better course of action, albeit accidental.

Screw-up #3: I should not have (avert your eyes if you’re squeamish) pulled on the thread hanging out of my cat’s bum. I had no idea that there was a needle on that thread (nor did I really understand how much thread it was), but I could have injured him quite seriously—even fatally—needle or no. He didn’t cry or anything while I extracted the thread, so I was pretty sure I wasn’t causing him pain. I actually didn’t realize that there was a needle on that thread until I went to take out the smelly garbage about a half-hour later.

The only thing I’m still not sure about: how on earth could that string and that needle have spent a week inside my cat and made their way out via the usual path and caused no serious damage?

And how is it Maurice will spend his remaining eight lives? 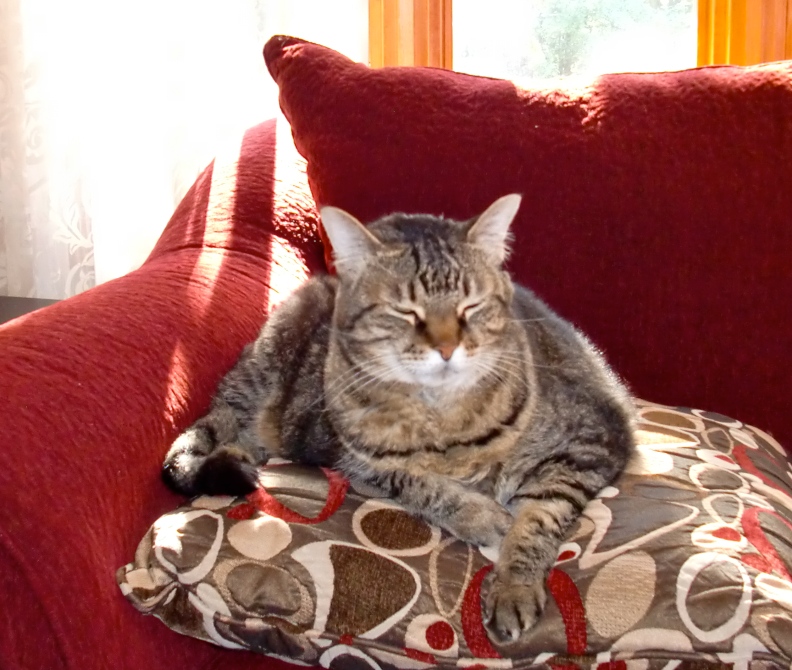