This year when I asked my kids what they wanted to get one another for Christmas, they both chose homemade gifts.

My son said he wanted to knit his sister a green scarf. Instead of trying to teach my four-year-old to knit and complete a scarf in the four days before Christmas, I talked him into making a scarf from fleece that he could select for himself at the fabric shop. He chose it because it had three different animals on it, and when he and his dad got to the cutting table, he was thrilled to discover a fourth animal! Bonus!

Back home I cut the fleece lengthwise and then made chalk marks and held the scarf ends for him while he cut the fringe. 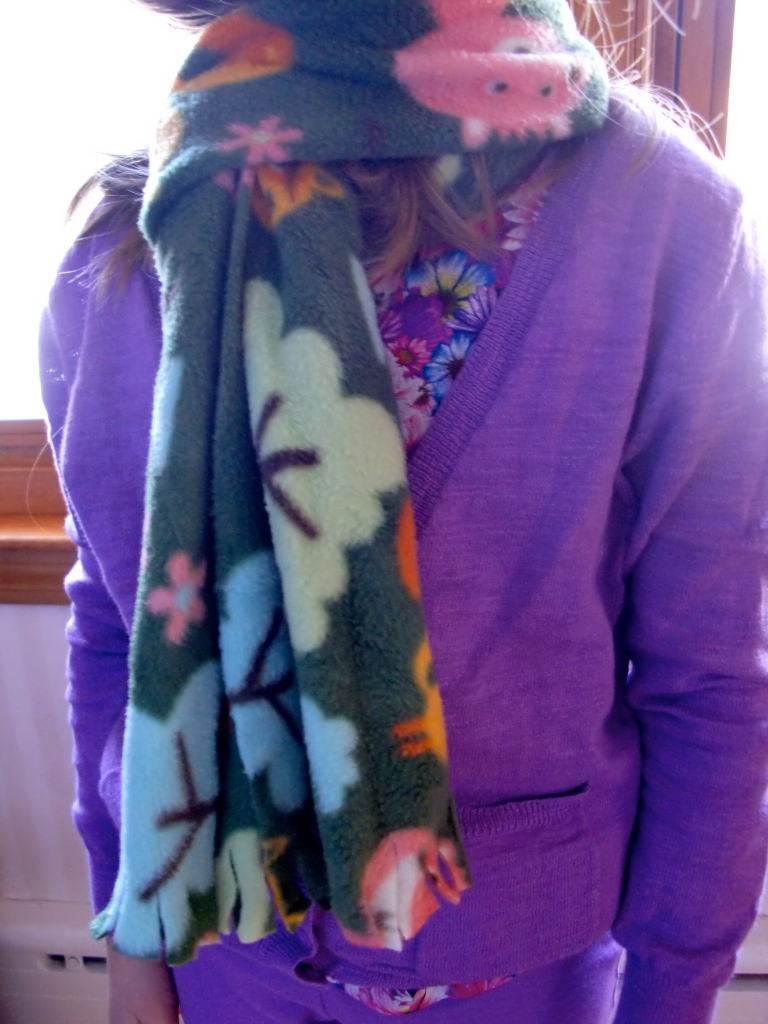 My daughter studied tessellations in her math lesson last week, and when she learned that a quilt square was a tessellation, she wanted to make her brother a quilt for Christmas. We went through what making a quilt entailed and agreed that a patchwork pillow might be a more doable gift. She decided on a 16-patch square in a checkerboard pattern. After much deliberation at the fat quarters bin in the fabric store, she had her fabrics.

I had asked my spouse to join us at the fabric store so that we could split up and keep the gifts more secret than they would be had I taken both kids on my own. When we got home, I asked, “Was that your first time in a fabric store?”

After a pause: “Then, I guess that was my first time in a fabric store.”

My daughter and I didn’t find time to start the pillow until Christmas Eve, but we hammered it out much faster and with much less yelling and crying than I worried we would. Her machine-sewing skills have progressed dramatically since last time we did a project together, and I was surprised to find the pillow-making process pleasant. I’d not been in the Christmas spirit, but that afternoon spent sewing with my daughter had me decking the halls with the best of them. 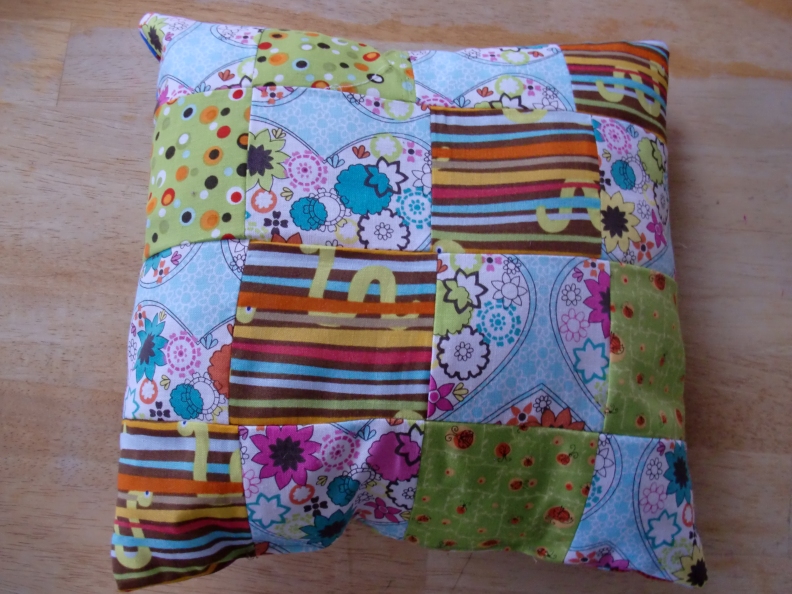 Christmas morning, I was ecstatic with how the kids reacted when they opened their sibling gifts. My daughter opened her scarf first and oohed and ahed over the animals then said, “Wow, you did a really nice job on this fringe!”

When my son opened his pillow, he said, “It’s a fluffy, comfy pillow!” He then pulled off the knit cap I’d made him, set the pillow on the floor, and laid his head on it so he could try it out.

I couldn’t have asked for a better reception for their homemade gifts. I should have known there was a hiccup on the way.

This morning while we were brushing teeth, my son asked, “Mommy, why didn’t Santa Claus visit our house this Christmas?”

I stammered out some vague answer about gift-giving and the spirit of Christmas and how Santa is a part of us all, and then while he was still looking at me blankly, kissed his cheek and left for my walk, thinking I would need to revisit our whole Santa-free Christmas plan. If he wanted to play the Santa game, I could certainly do it. I could even go all-out with it, with letters from the North Pole and half-eaten cookies on the mantle—the whole giant snowball.

But towards the end of the walk, I recalled his exact words and thought about his love of costumes and hats and play-acting. By the time I got back home, I decided to ask him what exactly he meant by “Santa Claus visiting our house.”

“You know, Mommy,” he said. “A big person puts on black boots and a red jacket and red hat and a black belt and comes to visit.”

“Does this person say anything?” I asked.

“Does this person bring anything with them when they visit?”

“They just dress up and visit.”

Then I remembered his perennial request for a Santa Claus costume. “Honey, do you want to dress up as Santa Claus next Christmas?” I asked.

“YES! I could wear a red jacket and red pants and…”

“Would you want to wear a beard, too?”

“Some people wear fake beards when they dress up as Santa. Do you want a fake beard?”

Fair enough. So between now and Christmas 2014, I need to procure a size 5/6 Santa costume, sans beard.

Correction—I need the costume by October 31st; he says he wants to go as Santa for Halloween next year.

It pays to take my kids literally. I just covered two holidays with one stroke.

2 Replies to “Advance Planning for Christmas 2014”