Holy cow. I cannot believe I finished this whole book. I should get a medal. Or at least a merit badge.

The short version of my review:

I liked it a lot, but it was a lot of work. The most delightful thing about Ulysses is that in the mumble-mumble years since I got my B.A. in English, I’d forgotten that this was a way that novels could be written. There’s a playfulness in Ulysses between author, character, and reader that I’d not experienced in a long time.

I read the Vintage Classics Edition of Ulysses, printed in 1990 from a 1961 edition. I chose this edition because it’s the one that Roof Beam Reader is reading for the Ulysses read-along and the typeface seemed like it would be easy to read. (While reading Pilgrim’s Progress earlier this year, I realized just how important typeface is to me when I read classics. The text itself is challenge enough; I don’t need to be further hampered by unpleasant type.)

I began reading the book without any helps besides a quick gander at an online annotated version so I could label the chapters in my book. I didn’t want any help on my first reading. I wanted to form my own impressions and come to my own conclusions before I read anyone else’s ideas—and there are many, many other ideas about Ulysses out there.

This worked fine for the first four chapters—Nestor, Proteus, Calypso, and Lotus-Eaters. These chapters seemed fairly…normal. I liked the writing, and while some of the internal/external shifts were a little confusing, I felt like I had a handle on things.

It’s in Nestor that one of my favorite passages in the novel appears. Stephen is in his classroom observing a young student who’s come to his desk asking for help with a math problem:

Ugly and futile: lean neck and tangled hair and a stain of ink, a snail’s bed. Yet someone had loved him, borne him in her arms and in her heart. But for her the race of the world would have trampled him under foot, a squashed boneless snail. She had loved his weak watery blood drained from her own. (p 27)

Then Stephen goes on to reflect about the absence of his own recently deceased mother, which makes the passage even more poignant.

I felt pretty solid throughout Hades, and I was still following well enough to appreciate the headline/article style Joyce used in Aeolus. Lestrygonians left me a little dizzy and kind of ill with the minute detail with which food was described, and Scylla and Charybdis inspired the first confused notes in the notebook I was keeping (“Where are they? What are they talking about? Who are they?”), probably in part because I really don’t get into Shakespeare that much.

Yes, I might put on intellectual airs, but I’m utterly plebeian when you get down to it. I wish I were into opera, ballet, Shakespeare, and sushi, but I’m not. I don’t dislike those things, but they’re really over my head for the most part, so I just can’t immerse myself in them (probably not a great plan to immerse myself in raw fish anyway). Of course, I also don’t get into most popular television shows, so there’s not really a place for me among the hoi polloi, either. I’m a woman in self-imposed exile from society. Kind of like Stephen Dedalus. Minus the Shakespeare stuff, of course. And the ashplant. And the drinking problem. Stephen smashes chandeliers in brothels; I homeschool and wrap gifts in cloth. We’re both outsiders in our own way.

Anyway. It wasn’t until Cyclops that I knew I really needed help. In my notes I wrote, “Okay. What the hell was this?” So I hit pause on the reading while I looked for literary assistance. 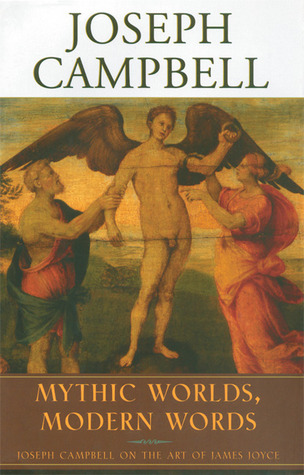 I settled on Joseph Campbell’s Mythic Worlds, Modern Words, about A Portrait of the Artist as a Young Man, Ulysses, and Finnegans Wake, because I read a review of the book that explained that Campbell initially hated Ulysses so much that he sought out the publisher to tell her just how much he hated the book and learned to love it as he learned how to read it. I was on the verge of hating the book myself, so I figured this fellow was a good one to read.

Campbell helped enormously. His book helped give me the confidence to pursue my own interpretations of the novel, and it helped give me a better sense for what Joyce was doing in the book.

So, here’s my overall impression of the novel:

Not much happens except in the minds of the characters.

There is no movement in this book. It is absolutely static. Unless you enjoy the miracle of the prose, everything lasts too long. (p 190)

Once I understood how Joyce interlaced the internal and external worlds of the characters, much of my confusion was alleviated. I know I didn’t catch a fraction of the references, and I had to look up Charles Stewart Parnell and many, many definitions, but I was still able to enjoy the book more than I had before.

I will suggest that even if you do enjoy the “miracle of the prose,” everything still lasts too long. I really (eventually) dug the way Joyce plays with style in each chapter, but each of these initially delightful techniques wore on into tedium, which was even more excruciating when I realized I still had 30 or 40 pages to read before the chapter was done. Even when I enjoyed the novel, it was fatiguing to try to put all of the pieces together into something that made at least a little bit of sense.

Campbell says this better than I again. He uses the analogy of an anamorphoscope, a toy in which a cone-shaped mirror is placed on a jumbled picture so that the scattered pieces come together in a recognizable image:

That is the way this novel is composed. Throughout its pages appear the scattered figured of apparently tawdry, fragmentary lives, to which the magical composing mirror is the title of the novel itself: Ulysses. This applied, the apparently trivial, accidental incidents of this undistinguished day of Bloom, Stephen, Molly, and the rest are seen as reflexes of the archetypes of classic myth: epic destinies of heroic quest, metamorphosis, and fulfillment. (p 174)

Campbell notes that Schopenhauer used the analogy of the anamorphoscope to describe how the events of a person’s life make little sense when they’re being lived and only come together as a story in retrospect.

And that’s what makes Ulysses both beautiful and tedious: it’s about life. The big stories of life unfold in largely boring daily, moment-by-moment activities. We give these moments meaning when we pull them together to form our own personal narratives, but in the living, they’re most often fairly insignificant. In most novels, unless it’s really important to the plot we don’t usually see the characters eating or going to the bathroom or scratching bee stings. We don’t listen into their thoughts as they jump from thinking about their grocery lists to thinking about a teenage sexual exploit to thinking about whether they should walk to take public transit. In Ulysses, we get it all because, Joyce tells us, it’s all important. It’s all part of the characters’ “epic destiny.”

What I think is especially cool, though, is how in Ithaca Joyce seems to warn his readers about reading too much personal meaning into his novel or any work of literature. Bloom is thinking about the use of literature for instruction rather than amusement, “as he himself had applied to the works of William Shakespeare more than once for the solution of difficult problems in imaginary or real life.” The result?

In spite of careful and repeated reading of certain classical passages, aided by a glossary, he had derived imperfect conviction from the text, the answers not bearing  on all points. (p 677)

I was so very glad to see Molly’s side of things in the last chapter. It made some of what happened in Mrs. Cohen’s in Circe make more sense, and it really helped me to have more empathy for both her and Leopold. I do feel a little irritated that the only role women play in the novel is in relation to other men, but I suppose that makes sense since we are, for the vast majority of the novel, only inside the heads of two male characters. It’s natural they would see the women in their lives in that way. But even in Penelope when we’re in Molly’s head, every thought is about her relationships with men. This does seem to be how her life is structured, but it’s still a little unsettling. Perhaps I need to read more modern literature—and probably more literature by women—for more self-actualized female characters.

And don’t worry: I’m pretty sure I’m sticking with lighter fare for Sisters Book Club from now on.