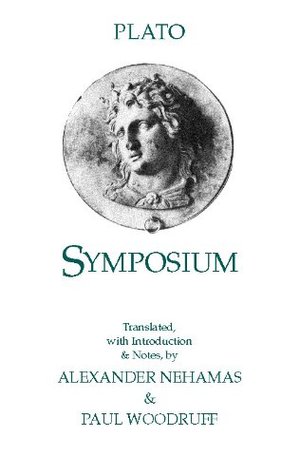 What a fun little book!

I’m sure I’m not grasping all of the nuances—I suspect a vindication motivation in the speech Plato gives to Alcibiades about Socrates—but since I’m not a scholar of Ancient Greek art and culture and lack the context necessary for philosophical criticism, I gave myself permission to just enjoy this book as it is.

And while I don’t think I learned anything new about Love, there was really a lot I liked about this book. I really enjoyed reading Aristophanes’ story of the origin of love, which I first learned about from “Hedwig and the Angry Inch” (and I’ve had that song stuck in my head since I read that section), and Diotima’s speech that Socrates shares (or makes up?) is masterful. My favorite, though, is probably Alcibiades’ speech. When he arrived on the scene, drunken and supported by a flute girl, I poured myself a gluten-free beer and joined the party (if one gluten-free beer even counts in a crowd where people are drinking wine by the half-gallon).

I love the picture of Socrates that Alcibiades paints, as a man who exists in a plane just a tad removed from the physical plane of the rest of us. I can only hope that someone will say about me someday, “But this [wo]man here is so bizarre, [her] ways and [her] ideas are so unusual, that, search as you might, you’ll never find anyone else, alive or dead, who’s even remotely like [her].”

I don’t think I have much hope of that level of bizarre-ness, but it’s a pleasant goal.

Now if only my discussion groups were half as fun as this one.