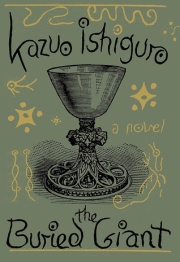 Often, especially when I’m trying to sleep, memories come to me bringing old emotions into the present, leaving me feeling embarrassed or angry or scared—and inevitably tired because they keep my brain churning instead of sleeping. Periodically, I wish there were a way to selectively erase these uncomfortable memories, à la Eternal Sunshine of the Spotless Mind, or to declutter them like I do my children’s outgrown toys, leaving me who I am with the benefit of these character-building experiences but without the memory and emotions of the actual experiences themselves. Inevitably I decide I’m better off with all of my memories, which is all the better because they’re here whether I want to scrap them or not, but The Buried Giant has me debating with myself yet again just which would be better, remembering or forgetting.

A few months ago, my children and I read about the Britons driving out the Romans and then Britain being settled (or invaded, or the victim of invited guests overstaying their welcome, depending on your perspective) by the Angles and the Saxons, who forced the Britons out of most of the land that was finally theirs again and into what’s now Wales, Cornwall, Scotland, and Ireland. The Buried Giant is set during the time between the exit of the Romans and the squeezing out of the Britons, a time when the Saxons and the Britons lived precariously side-by-side.

One of the first things that struck me about this novel was the melding of myth and reality. In the Saxon village, a very Beowulf-like story plays out, with a hero coming from elsewhere to slay two horrible creatures that are terrorizing the village. Beowulf is a tale brought to Britain by the Saxons, and the similarity of the story here in the Saxon village made me wonder if the mythology of a culture is destined to play out again and again. Perhaps that story, somehow, is the story of the Saxons, and some variation of it will happen again and again as though it has a life of its own. I don’t know the mythology of other cultures in Britain well enough to know if this idea existed elsewhere in the novel, but I’d be interested to find out.

The other element of the story that seems particularly significant to me is the idea of forgetting versus remembering. On the one hand, we want to remember tragedies and atrocities so we can (maybe) prevent them from happening again. But couldn’t the constant remembering keep alive the shame, guilt, and desire for vengeance that will keep peace from ever taking hold?

The other day I watched a video posted on Facebook about the racist roots of popular children’s rhymes and songs. I watched this video and wondered, is there ever a way to move past this? Can there ever be a time when a child can sing “Shoo fly don’t bother me,” or choose which cookie to eat using “eenie meenie miney moe” and it’s nothing but innocent? Can the past be cleansed through forgetting, or will it always be with us, buried beneath the green hills and languidly running streams like the bones of those slain long ago? Is there value in strategic forgetting, something like an induced coma for the culture, so that we can heal the wounds of the past without the heat of our emotions reinjuring us or creating new wounds, sleeping through the painful and difficult work of healing? Then generations in the future when the emotions are worn to smooth edges, could we sit up, rub the sleep from our eyes, and remember in peace?

I think this novel argues that this isn’t possible. A forgotten slaughter is still a slaughter, a betrayal of trust still a betrayal, even if we forget the details. Just as we’re the products of both the good and bad memories of our individual lives, our culture is the product of both the good and bad that we’ve done or been subject to. We have to move on whole or not at all, even if that means living with division and suspicion—or much worse—until we figure out another way to live with one another atop the bones of the past.

Oh, but forgetting is so tempting.