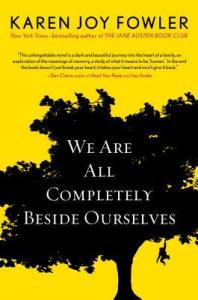 We Are All Completely Beside Ourselves was the SBC book selection for November. Join the conversation in the comments or join our Goodreads group to discuss this month’s book or any of our other selections. In December, we’re reading Shirley Jackson’s We Have Always Lived in the Castle.

This book was darned near amazing to me. Karen Fowler captured college life in the mid-90’s well (at least as I experienced it). Some of the slang was different, but that could have been a geographical difference. There was a mention of the BabyBjörn carrier being used in the mid-1970’s in the United States, which may be anachronistic (the carrier hit the European market in 1973, and while I can’t find a reference for when it showed up in the U.S., I associate the brand more with the mid- to late-90’s and early aughts), but even if it’s outright incorrect, I’m okay letting it slide.

Aside from these small things, the novel rang with emotional truth and depth. I really resonated with an idea that the narrator repeated throughout the story: “Where you succeed will never matter as much as where you fail.” (this one’s on p 288 of the copy I read) I wonder if that’s a particularly GenX sentiment or if it’s just a point of view the narrator and I share. If it is a GenX thing, it could explain why we were so commonly accused of apathy. I feel hopeless just thinking about it.

Another quote I like: “…no one is easier to delude than a parent; they only see what they wish to see.” (274) And I would argue that this applies whether what they’re seeing is positive or negative. And it probably doesn’t just apply to parents, but perhaps parents are particularly susceptible to it.

With its circling back and layering of past and present, the structure of the novel worked very well for me and represented well a point the narrator makes about how we’re very good at remembering “who” but not so great at remembering “when.” My biggest disappointment with the novel was with the ending, although not as much what happened in the end as how it was told. It sort of broke away from the structure of the rest of the novel and had the feeling of a wrap-up, which had less punch for me than the rest of the novel. But endings are difficult to nail.

And because I can’t say much about this story without giving away stuff that it’s better to find out by reading it yourself, here’s just one more quote:

“It’s really easy to persuade someone to be hateful…You can train any animal into any behavior on cue if it’s a natural behavior to begin with. Racism, sexism, speciesism—all are natural human behaviors. They can be triggered any time by any unscrupulous yahoo with a pulpit. A child could do it.” (169)