This is the first book I finished for the 2017 24 in 48 Readathon! I cheated a little and started six hours early, but hey…I finished the book! I’ll post book reviews here on the blog, but if you want the play-by-play, take a look at @imperfecthappiness on Instagram. 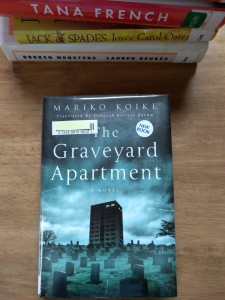 Overall, this book was pretty good. It wasn’t super-spooky, but I sat up late to read the whole thing in one sitting (with a break to put the kids to bed) because it was easy to read and because I found the deeper issues in the novel compelling.

There were no huge surprises, horror-wise—an apartment next to a graveyard, misbehaving electronics, weird noises, spooky happenings, a trip to check out city records about the history of the site. There were some things that were unclear or just dropped without further explanation, like the bird and the dark little figures. Some of the language was cliched or otherwise uninteresting, but I have a higher tolerance for this sort of thing in a translation. I found myself wanting to ask my friends who speak/read Japanese to read this and tell me if the word choice was any more skillful in the original Japanese.

One of the biggest things that gave me trouble was that the motivation of the antagonist(s) was unclear. Did they want to drive out the tenants (if so, why make it difficult to leave)? Did they want to kill the tenants (if so, why drag it out)? Are they targeting the one family specifically (if so, why all the collateral damage)? As another reviewer mentions, are they the spirits of dead people or are they malevolent spirits of some other, mythological type? Are they limited in power, as the beginning of the book suggests, or are they omnipotent, as they seem to be by the end (although they apparently still need the elevator)? It seems like the author can’t decide.

Two things kept me interested in this novel. First, the author did an excellent job of maintaining suspense. The action took almost too long for me, but not quite. That’s good suspense.

Second, there’s this intersection of the personal haunted past of the main family in the story and the haunting of the building. They’ve attempted to ignore the things haunting them the way they try to keep living in the apartment building after some really scary—and dangerous—stuff starts happening. Even when things get really bad, their major concern is practical—how to have enough food—not how to address the issue directly and solve it. They get indications from their neighbor, from their daughter, and from some odd stuff related to a Buddhist altar they’ve neglected, but it’s almost like they’re so accustomed to accepting their punishment, of feeling like they deserve whatever’s coming to them because of the guilt and shame they feel for past mistakes, that they can neither save themselves and nor avoid dragging others they love into the danger. That just might explain why they keep using the elevator even when I keep yelling at them in my mind, “Just use the stairs already!” It reminds me of how I feel when I’m dealing with people stuck in patterns of behavior that no longer serve them and that are leading them towards a cliff (or at least in circles). I get stuck in those patterns, too, but it’s much easier to see and critique them in other people. With subtlety, the author manages to connect the behavior and the danger not only to the main characters’ past but to the historical past of the country of Japan. It left me thinking of the patterns of behavior in the United States that lead us to make self-defeating decisions as a nation.

This is what keeps me in horror novels. The spooky stuff is titillating and after I’ve closed the book, it’s fun, in a way, to try to keep myself from running down the dark hallway to my bedroom, sure there are unseen things following me, but the meat of a horror story for me is how it reflects the deep-down fears we have in real life. In this novel, it’s the fear of our past and our feelings of shame and guilt and how this fear can follow us over time and geography, blind us to self-reflection, and perpetuate patterns of behavior that are dangerous to ourselves and that draw others into danger as well. In that sense, we all live in a graveyard apartment.

3 Replies to “The Graveyard Apartment”