So, I don’t expect to read for twenty-four hours straight, nor do I expect to finish (or even start) all of these books. But this is what I have in my stack for Dewey’s 24 Hour Readathon on Saturday:

Time-sensitive reads on which I’m excited to make progress:

Into the Go-Slow by Bridgett M. Davis

A Girl from Yamhill by Beverly Cleary

My Brilliant Friend by Elena Ferrante

Books to read (or listen to) with my kids:

By the Shores of Silver Lake by Laura Ingalls Wilder

Odd and the Frost Giants by Neil Gaiman

The Last Days of Socrates by Plato

The Histories by Herodotus

Wouldn’t it be awesome if I could read all of these by Sunday morning? Well, awesome except that I’d feel miserable from sitting still for so long, and I wouldn’t retain anything I read. Or maybe I’d retain things but I’d mix up everything so I’d go into next week thinking that Beverly Cleary grew up on the outskirts of ancient Rome and once had to defend herself against a death sentence in front of a Greek jury before moving with her family to a railroad camp in South Dakota. Actually, that would be kind of awesome.

It’s possible that the decade of chronic sleep deprivation has finally caught up with me and is seriously clouding my judgment, but I just signed up for Dewey’s 24 Hour Readathon.

The link gives all of the details, but the basic idea is pretty straightforward: I’ll read as much as I can between 8am on Saturday, April 23, and 7:59am on Sunday, April 24. I’ll try to update here and/or on my Facebook Page as the day progresses. END_OF_DOCUMENT_TOKEN_TO_BE_REPLACED

I’ve vowed to keep my to-read list under 800 books, which means it generally hovers around 798. I read for pleasure, but still, seeing that number stay right there and never change gets a little disheartening. So when I saw Roof Beam Reader’s Announcement for the 2015 TBR List Challenge, I thought it would be a great way to finally take a bit of a bite out of my ridiculous to-read list. The basic idea: Publish a list of twelve books plus two alternates that I plan to read in 2015. And then, if all goes well, actually read those books. I seem to be full-swing into my midlife crisis, so I packed my list with books to help me ponder the meaning of life, foster mindfulness in my daily activities (especially with my progeny), and—if there’s any time leftover—maybe do a little wishful thinking about what my 40’s might look like. As a bonus, if I read #5, I can finally return the book I borrowed from a friend almost three years ago. I think she forgot that I have it, so that will be a nice surprise for her, if she likes to have proof that her friends are completely irresponsible about the things they borrow. I’ll update this list with links as I review the books. So, come on back every now and then and see how I’m doing. And…if you’re keen on taking a chunk out of your own TBR list, visit Roof Beam Reader (link in the first paragraph and below) and sign up by January 15th!

Last week I posted my intention to participate in The Classics Club’s Classics Spin #5. To recap, I listed and numbered 20 books from my Cavalcade of Classics list. Then when the number was announced, whatever book on my list corresponded to that number would be a book I would read by April 2.

They announced the Lucky Spin Number this morning and it’s… 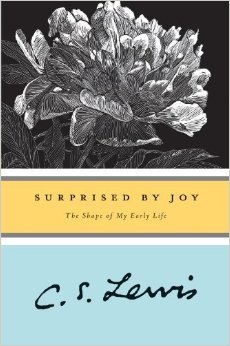 On my list, #20 is C.S. Lewis’s memoir Surprised by Joy: The Shape of My Early Life.

I’m pretty excited to read this book. My kids and I have started reading the Chronicles of Narnia together, so the timing for this memoir is excellent. I’m already getting new insights into the series reading it for the second time, and I think (or at least hope) that reading Lewis’s memoir will only enhance the experience.

I’ve still got four books on my reading list to finish in February, so this will be one of my classics for March. With any luck, I’ll finish the book and have a review posted by April 2.

Anyone want to read with me? Let me know in the comments, and we can compare notes!

The first day of each month, I’m posting a summary of what I read the previous month and what I plan to read in the coming month. I would love if this could become a conversation in the comments about what’s on your reading list, too!

May was another light reading month (light in quantity, not in quality). And I did something I rarely do: I took a book off of my currently-reading list. I decided to stop torturing myself by keeping Fanny Stevenson: A Romance of Destiny hanging over my head and move it to my “stopped-reading” list.

Because the person who loaned it to me said I could keep it and because I’d planned on donating it to the church book sale but missed the deadline, I still have it. I’ve not decided yet whether to keep it and try again or to pass it along. After I Write Like said I write like (among others) Robert Louis Stevenson, I thought maybe I should give the biography of his wife a better try, but now I’m not so sure that’s a compelling enough reason to keep me reading.

At any rate, enough about what I didn’t finish reading this month and on to what I did… END_OF_DOCUMENT_TOKEN_TO_BE_REPLACED

These past few weeks, I’ve been shopping around for a challenge to kick off 2013. Noting that I’m not quite as devoted to finishing challenges as I am to starting them, I decided to stack the deck and choose a challenge based on something I would be doing anyway: reading.

Back when I was first researching the possibility of homeschooling my kids, I read Susan Wise Bauer’s The Well-Educated Mind. In this book, she gives a brief explanation of the trivium and how to apply that method of study to reading The Classics. She then goes on to give suggested reading lists in literature, memoir, history, drama, and poetry. I bought the first several books on her literature list (except for those I already owned) and actually read Don Quixote (the first novel on her list and, actually, the very first novel ever) in the manner she recommends. I liked it. It required a lot more brain than I think I usually use when I read, but I retained a lot more of the plot than I usually do. I’d intended to go back and read the rest of the books from her lists, but so far that’s not happened.

Then a couple of weeks ago I found a link to The Classics Club on Shelf Love, one of my favorite book blogs. The Classics Club is basically a reading challenge. To join, one chooses 50+ classics, posts the list on one’s blog, and vows to read all of the books on the list within 5 years.

So, I’ve named my challenge “Cavalcade of Classics,” and I’ve made what I hope is a realistic but challenging list. It’s drawn primarily from the literature, memoir, and history lists in The Well-Educated Mind except that I’ve replaced some books I’ve already read with others by the same author, and I’ve added a couple of others, most notably Atlas Shrugged, which I think I really ought to read to see what all the hubbub’s about even though it’s really long and I’m not at all sure I want to spend that much time with Ayn Rand (I read her Anthem in high school and liked it, though, so maybe it won’t be so bad). I also removed Mein Kampf. I know I should read it because of its large and abominable influence on the 20th century, but I heard that when you read something your brain waves mirror those of the author when he was writing it, and I don’t think I’m up for that in this case. This is also why I’m also not too sure about reading Nietzsche’s Ecce Homo, but I’m still feeling up for that challenge, at least for now. We’ll see how I feel after a few dozen classics.

If a re-read is still on the list it’s because I last read it for a school assignment and think I ought to give it a closer look or because I really liked it and just want to re-read it. But if the thought of slogging through The Great Gatsby again threatens to derail the whole project, I’ll simply skip it. Actually, I reserve the right to cut this list ruthlessly if I get to 2014 and have only read five of the books or something. It’s my list, and I’ll cut a book if I want to.

My Cavalcade of Classics Challenge!