Or perhaps it would be better if I didn’t get your expectations too high.

This was just a little something my mom and I threw together this week.

Thanks to my buddy, Dana, and her miter box, we were able to make a frame for it. Thanks to my son, we needed to buy some white satin spray paint to touch up where he sprayed green food coloring on it. Of course, he’s also the one to thank that it exists at all, so I suppose it all evens out (plus, I was the one who said, “Hey! I’ll fill a squirt bottle with water and green food coloring and hand it to the baby! That’ll keep him occupied while we work on this one-of-a-kind art object!”). And a very special thanks to my doula, Stacy Smith, for helping to capture my off-center belly in plaster. 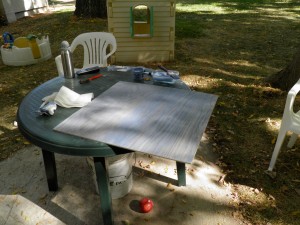 Waiting for the paint to dry. (Have you guessed what we're making yet?)

Better A or B? We painted both so we could choose which we liked better. The one we didn't use (the one on the left) became the new insert for the cover to our crawlspace. 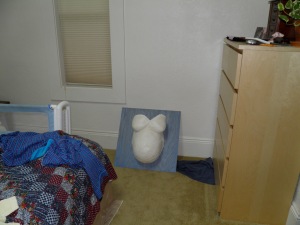 In process. My son was quite interested in the project at this stage. 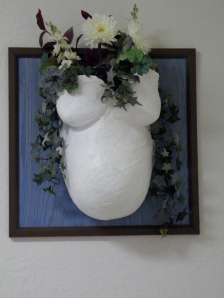 The finished and mounted belly cast. This is on our bedroom wall and will likely freak me out when I see it in the middle of the night tonight until I remember what it is.

For those unfamiliar with belly casts, this is an actual plaster cast of my torso from when I was about 37 weeks pregnant with my son. It involved cotton impregnated (tee hee) with plaster, lots of oil, and me sitting in my underwear in my kitchen. I’d intended to get one while pregnant with my daughter, but my water broke before I could have my friend make the belly cast for me. It turned out I would have had plenty of time to have my belly cast done before my daughter made her appearance, but we didn’t know that at the time and missed the opportunity.

At any rate, I have this one, which has been collecting dust on top of my dresser for nearly a year. I’m quite pleased with the result! My husband’s reaction was, “Wow! That’s really nice! Those aren’t real flowers, are they?”

My mom’s flight was delayed, so she’s staying an extra day and most of tomorrow. We’re planning an outing, though, so we’re unlikely to complete any major tasks before she needs to be at the airport. I plan to bake two loaves of bread and she plans to prune a tree and two bushes and maybe rake some leaves. Just a casual morning at home before we head out for a picnic lunch.