My family are library super-users. We manage holds, checkouts, renewals, and returns with a carefully balanced choreography. We love libraries so much that when my children go to bookstores, my daughter spends an hour reading portions of books, taking note of the titles she wants to check out from the library, even when we’re there for the express purpose of buying a book to take with us while we’re traveling.

Most of our questions were answered by looking at the Library of Congress website. 164 million items, including 38.6 million+ books in more than forty languages. They do have movies. They probably do have the Warriors series. You can’t check things out until you’re sixteen, when you can get a card to check things out within the library.

“How do you check things out within a library?” they asked. I assured them that was a question that we could ask our tour guide. Even not being able to check things out, they were excited to look at so many books.

The afternoon we’d set aside for our visit, we set out from our hotel to walk to the library. It took a little longer to walk there than we’d anticipated, and we found ourselves running up Capitol Hill, getting through security at the library, and arriving, breathless, just in time to join the tour group as they were walking up the stairs.

The tour was really cool. The library is incredible, with murals and statues and mosaics on every surface; you couldn’t swing a cat without hitting an allegory. If security would let you bring a cat into the Library of Congress. And if you felt like swinging it.

My children waited patiently throughout our hour-long tour, learning all about the art and the history of the library.

Once my daughter pulled me aside and in a stage whisper said, “It’s been forty-five minutes, and we haven’t even seen any books.”

And just a few minutes after, we did get to see books…from the Main Reading Room observation deck a couple of stories up and enclosed in glass. There were rows and rows and rows of books, and my children were practically salivating to get in there with all of them. 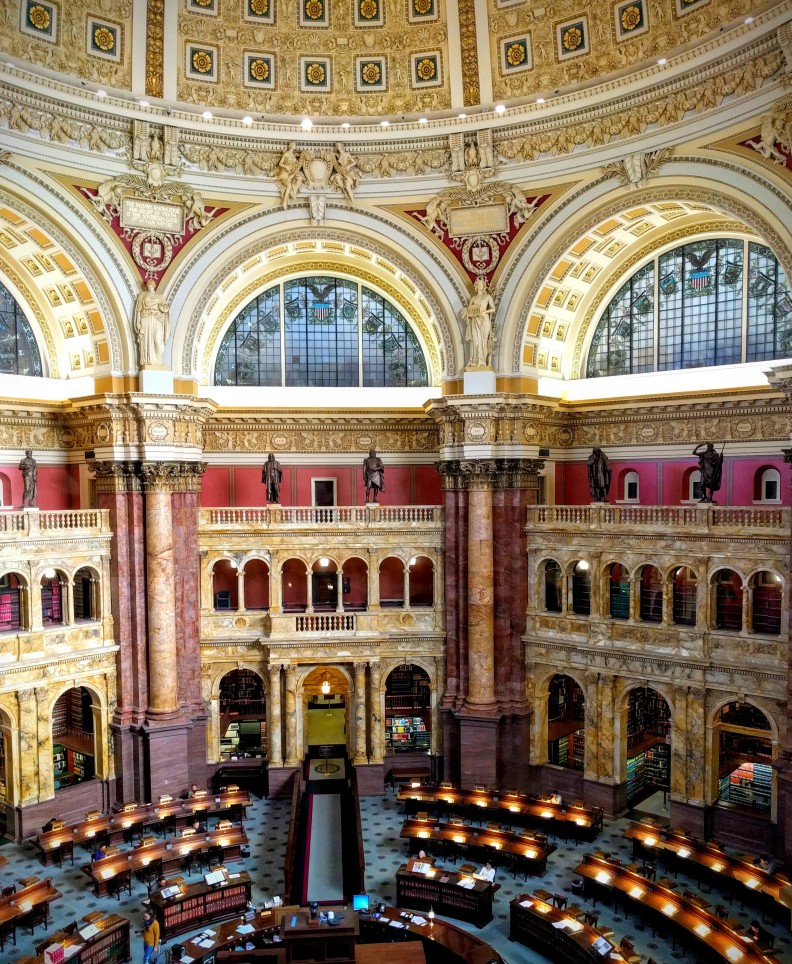 And then that was it.

As the tour ended, our tour guide, Harvey, said, “The greatest thing about the Library of Congress is that it’s for everyone! You just need to be sixteen or over and have a valid drivers license or passport to use the reading rooms.”

My daughter asked, “Is there any way someone under sixteen can go into the reading rooms?”

Harvey looked from my son to my daughter and then to me. “No, I’m sorry. Maybe you could ask Congress to make an exception.” Laughter from the rest of the tour group.

It turns out that not only can someone under sixteen not check things out, they can’t even go into the reading rooms. They can’t even, ironically, check books out from the Children’s Literature Center, the contents of which are held in the General Collections, which are only available to those with a readers card, i.e., those over sixteen.

For example, they do, in fact, have Erin Hunter’s books—like her Firestar’s Quest, but you have to request them from the Jefferson or Adams Building Reading Rooms, to which my children do not have access. Screenshot of what you get when you look up Firestar’s Quest in the the LOC online catalog: 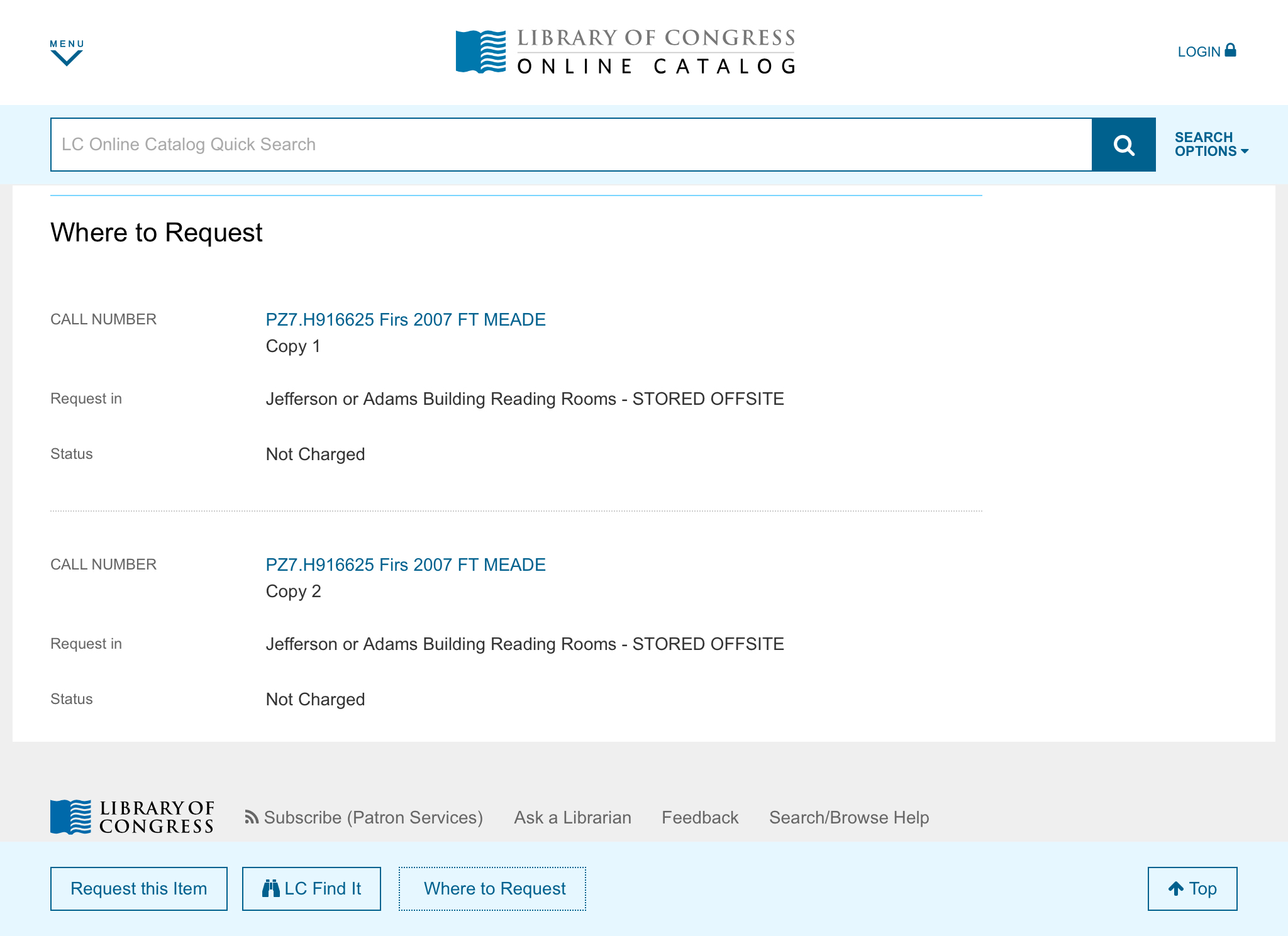 My children were not prepared for this.

Crestfallen, we went across the entryway to visit the re-creation of the Jefferson library. There my son looked up at me and began to cry.

“Mommy, he lied.” (“He” meaning Harvey.) “He said that the library is for everyone, but it’s only for people sixteen and older.”

My daughter was more stoic, but still I found myself hugging and comforting my children in the middle of the Library of Congress, surrounded by books they could neither read nor touch.

Luckily there was a Young Readers Center, a room where my kids could sit around reading books that were great for middle-grade readers but lacking for those between the ages of twelve and sixteen. It was like margarine when you’re expecting butter, but it was down an echo-y and very reflective hallway, which they enjoyed. It salvaged the trip for them a little, but the injustice still stings. 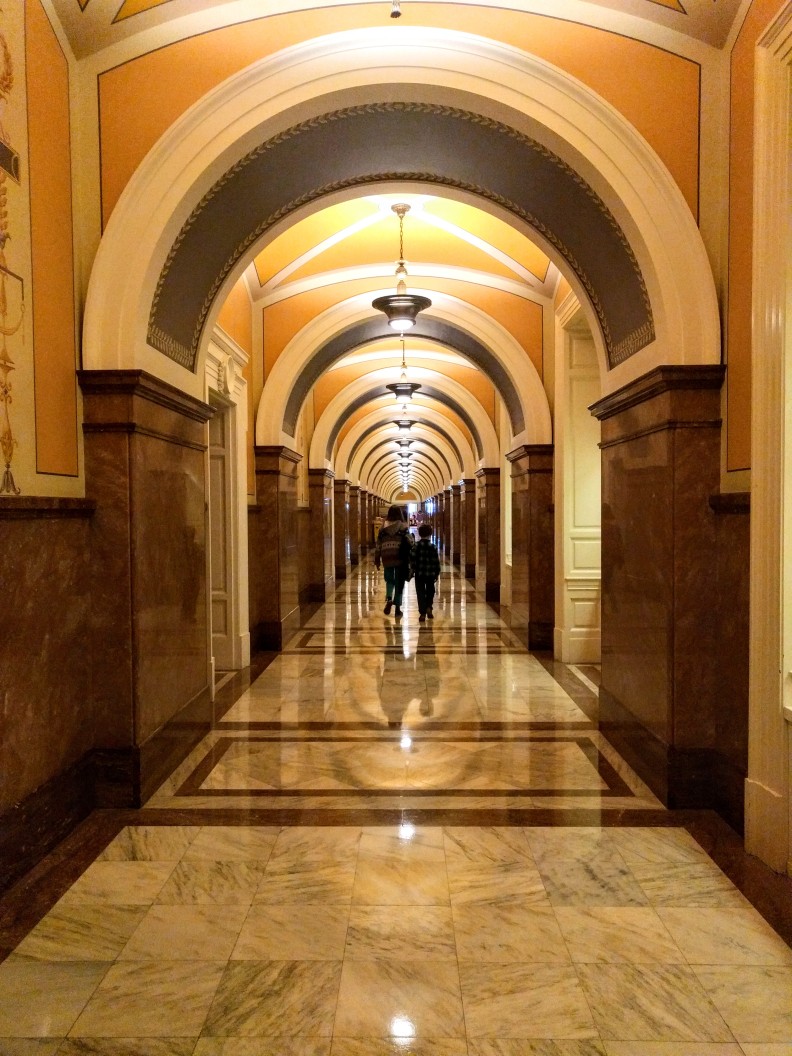 At bedtime that night, I told them a story (shamelessly paraphrased from From the Mixed-Up Files of Mrs. Basil E. Frankweiler) about two children and their mom who hid out in a bathroom at the Library of Congress and then snuck out after the library was closed to read books all night in the Main Reading Room. We talked a bit more about how unfair it was that they couldn’t use the library.

“I know Harvey was kind of joking,” I said, “but you really could write to Elizabeth Warren and Ed Markey when we get home. And to our representatives. And we can ask all of our friends in different states to write to their representatives in Congress and ask them to change the rules.”

“Senators must get a lot of mail,” my daughter said.

“Yes, they do. But if enough people write, the letters will catch their attention. They’ll think there’s a groundswell of public support for allowing people under the age of sixteen to use the Library of Congress.”

“What’s a ‘groundswell of public support’?”

“Time for bed now, my darlings.”