Instructions for living a life: Pay attention. Be astonished. Tell about it. ~ Mary Oliver

This one has the approval of vegans and dairy-eaters alike, but if you eat gluten and dairy (and love lots of cheese), also check out my Super-Secret Vegetarian Lasagna!

I have been trying since 2004 to make a yummy vegan lasagna. Back when I could still eat dairy, I would top the ones that weren’t yummy with a thick layer of melted cheese and that would make them palatable. Now that I can tolerate neither gluten nor dairy, the stakes are higher.

This weekend, however, I seem to have broken the code. This lasagna had me going back for seconds (and thirds, if truth be told). For the first time ever I didn’t spend my meal wishing I was eating the gooey cheesy lasagna on my husband’s plate rather than my own.

It was a red-letter day. And I got to serve yummy lasagna to the vegan friend who was over, which made me quite proud! 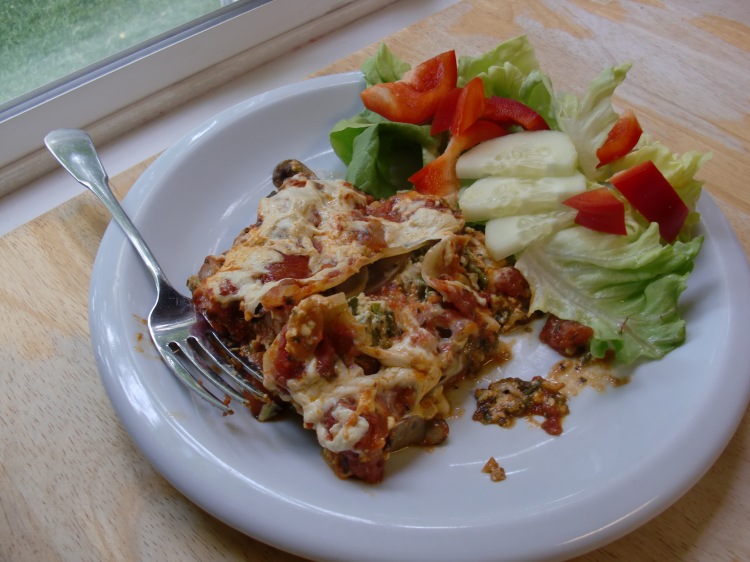 1 package mozzarella-style vegan cheese (Daiya is gluten-free and not awful, but it seems like everyone’s got their favorite brand. Use what you like.)

Heat the olive oil in a skillet over medium heat. Add the sliced squash and mushrooms along with the oregano and garlic and saute until the mushrooms have released their juices and the squash is just softened.

Cover the lot with a layer of foil and place in the oven. Bake for 45 minutes or until sauce is bubbly and vegan cheese is melted.

This blog is made up of photos I've taken and words and sentences I've written. I hope that what you find here speaks to you and that you share and reference it elsewhere. I also hope that if you share something from Imperfect Happiness that you mention where you found it. It would be even awesomer if you linked back to the original content here.