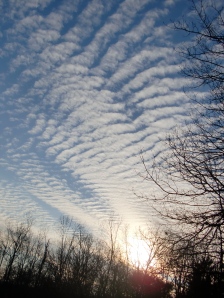 I was going to start a Big, Hairy, Audacious Plan on October 1st. It was going to be awesome. It was going to last more than a year and by the end I was going to be fitter, healthier, better rested. I’d know how to play the piano, would speak Spanish fluently, would be submitting stories and essays for publication on a regular basis, and would have read and comprehended at least one dozen literary classics.

But then reality sunk in.

At first I mistook reality for my husband being a naysayer for questioning my plan.* I called him that and many other things and then I went to bed. Even though I have not been sleeping well at all (~5 hours a night, interrupted by my three-year-old), I could not go to sleep. I lay there for an hour trying to fake my way to sleep until I finally got up and made my jittery, anxious self go to the kitchen and journal while I ate a snack.

It was during this time that I realized that I was just totally fried. The insomnia, the digestive symptoms, the eczema, the weight fluctuations, the anxiety—all of it was related. And none of it would be solved by my Big, Hairy, Audacious Plan.

1) Deactivate my personal Facebook profile. Yes, I know it was less than six months ago that I reactivated it with my cleverly devised pseudonym and all of that. I had very good reasons for doing so, but over these months I realized that, although it’s not the only cause of my being fried, my interactions on Facebook certainly weren’t fostering calm and a sense of wellbeing. On the contrary, they were making me anxious. They were making me irritable. They were making me want to move to the frozen north of Canada and live in a travel trailer with nothing but caribou and lichen and permafrost to keep me company. I lamented the fact that I would not be able to grow a beard in this scenario. Instead, I deactivated my Facebook account in a fit of insomnia. Also a rash decision, but perhaps not as rash as Option A. (My Imperfect Happiness Facebook Page remains intact, as does my @imperfecthappy Twitter account.)

2) Meditate. Like a lot of meditation. Formal meditation twice a day and informal (reminding myself to take a deep breath or, if necessary/possible, lying on the floor with my eyes shut for a few breaths at least once an hour).

3) Practice Gentle Yoga. At least thirty minutes a day of the slow-moving, breath-led variety as part of my bedtime routine. This isn’t for physical fitness; it’s for activation of my parasympathetic nervous system.

4) Write. Since I was seven, I’ve been told that I was a “great writer.” Over the years, I’ve gotten more and more bogged down by the contradiction between being told that I was a “great writer” and struggling with that very activity. If I’m a great writer, why is it so difficult? If I’m a great writer, why didn’t I get more than a polite rejection letter for that short story I submitted in 2004? Why did I get rejected for that incredibly competitive writing fellowship with the famous author’s name attached to it? Why didn’t I get into the renowned MFA program? Why didn’t I win higher than fifth place in that writing competition in seventh grade? I could reason through only one very painful conclusion: I am not a great writer. After several years of mourning, I finally decided that even if I wasn’t a great writer, I still wanted to be a writer. I don’t have to be great to have fun. So, that’s what I’ll be trying to do with Brenda Miller and Holly Hughes’s The Pen and the Bell. With a different focus area in each chapter, this book leads the reader through exercises designed to access the shared benefits of both writing and contemplative practice. I’ll focus on one chapter a month, writing every day using the exercises outlined at the end of each chapter. With any luck, this will help me to rediscover the joy and fun that writing used to hold.

There are some other nitty-gritty guidelines I plan to practice around internet usage, media consumption, fostering compassion, and building relationships, but these are the high points. I’ll plan to check in weekly and let you know how I’m doing.

*I still think my husband was being a naysayer, but that doesn’t mean he was wrong.