It’s been a long time (like, four years) since I published a recipe post. I used to publish them a lot, testing out new recipes and variations on old recipes and scarfing down the failures and successes alike, until I noticed a correlation between recipe blogging and the upward progression of the numbers on my bathroom scale, especially once we moved to the suburbs and my incidental physical activity decreased dramatically. So, I cooled my jets on food-related posts for a while.

Then when I was in Utah recently (yes, I’m mentioning Utah again, but it’s just a passing mention this time), I stumbled upon a simple skillet-to-oven way to cook chicken. When I got home, I modified it for the slow cooker and decided to share the results with the Internet. 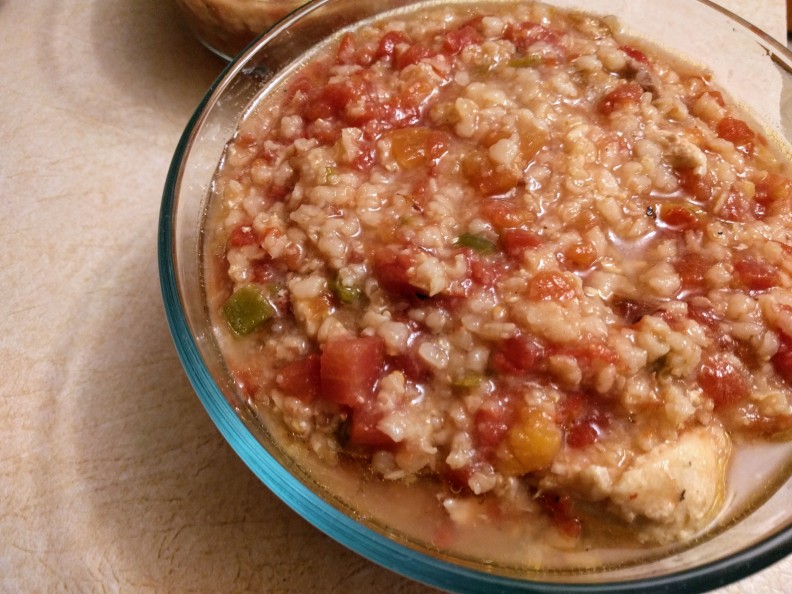 It’s not the prettiest gemisch, and I’m not even sure how to classify it (it’s kind of like a very (very) lazy paella, but I’m going with “stew” for now), but it’s easy, tasty, and can be left to cook all day so it’s ready at suppertime. Here’s how to make it, with modifications after the recipe:

And there you are! This is enough for a family of four with leftovers for lunch.

Firmer Rice Variation: Cooked this way, the rice gets pretty soft, so if that’s not your thing, you can add the rice about three hours before the end of the cooking time, or you can cook it separately (don’t add the extra water to the slow cooker, and cook 1 cup of brown rice in 2 cups of water) and, while it’s still hot, stir it into the stew at the end, or spoon the stew over individual servings of rice at meal time.

Less-Spicy Variation: If Rotel tomatoes are too spicy, you can sub some or all of them for an equivalent volume of your preferred variety of diced tomatoes. If you use all un-spicy diced tomatoes, you might add your choice of spices (garlic, oregano, chili powder, cumin…whatever strikes your fancy, just remember that when you cook with a slow cooker, you need to add up to twice as much of each spice as you normally would because the flavors dull with long cooking).

More-Spicy Variation: Replace some or all of the mild Rotel tomatoes with whole-heat Rotel tomatoes. Or if you like super-spicy, you could add a diced jalapeño (or habanero if you’re really macho about spicy stuff and/or if you’re my brother) with the tomatoes and rice.

Vegan Variation: Get fancy and replace the chicken with canned garbanzo beans (no need to sear first), add sautéed onions and garlic to the tomato/rice mixture for a vegan option. This has the added benefit of not needing to cook as long as the chicken version.

Grain-Free/Paleo Variation: Leave out the rice (and extra water) for a grain-free/Paleo meal.

There are myriad options at your disposal.

If you’re interested in the skillet-to-oven method I mentioned, let me know in the comments, and I can write about that one, too, after I make it again so I can take a picture. It’s just got two ingredients (three including the oil). Super easy.

3 Replies to “Spicy Chicken, Tomato, and Rice in the Slow Cooker”